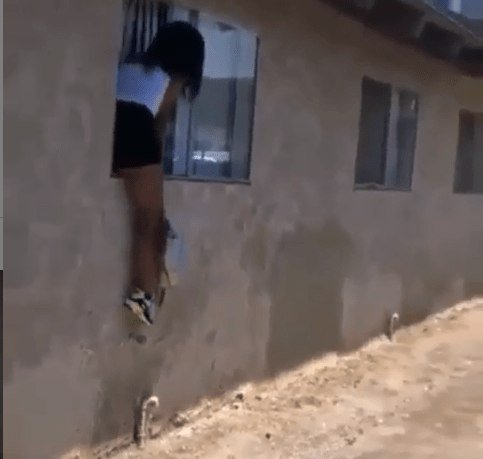 A viral video of a sidechick jumping wall after wife of her lover came knocking at the door hit the internet.

According to the caption of the video, the young lady, obviously, a side-chick had to escape from the window as the wife of the man she was sleeping with came knocking at the door.

According to reports, the lady was having an affair with the man when his wife suddenly knocked on the door.
Upon sensing danger, the slayqueen immediately got hold of her hand bag and jumped through the window.

Fortunately, for her, she was able to escape through the window and avoided disgrace and embarrassment.

The video was filmed by a by-passer who saw the lady coming out of the window.

In another story,a married man named Jarmill Walker has taken to Facebook to share photos of his pregnant wife carrying his side chick’s baby.

Sharing the photos, he expressed his happiness over the fact that he got married to a strong and forgiving woman who stayed by his side despite his mistakes.

“God doesn’t make mistakes. Unfortunately, people do. This is not the ideal situation nor am I the perfect man, husband or father but we learn from our mistakes. I’m grateful for God’s mercy and to have an incredibly strong and forgiving wife by my side and I appreciate the woman she is. This is my beautiful daughter, Bria Nicole”, he wrote.

Husband On The Run After Wife…