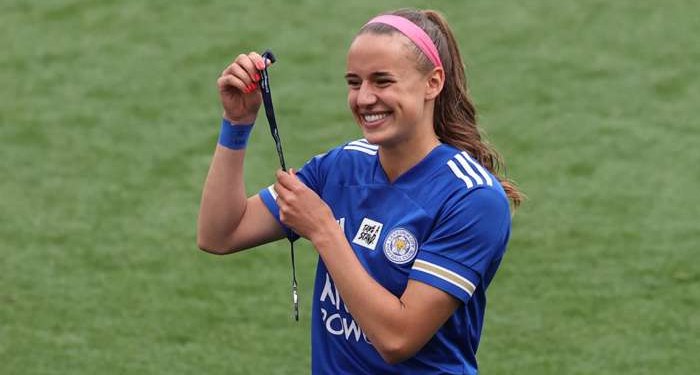 Leicester City Women’s defender Ashleigh Plumptre has expressed her desire to meet with Kelechi Iheanacho and Wilfred Ndidi, who plays for the men’s team while also revealing her interest to play for Nigeria.

The 23-year-old is currently having her second spell with the Foxes and in the 2020-21 season, she helped the club to win the FA Women’s Championship title, earning a two-year contract for her fine showings in the campaign.

Since her return to the Foxes in 2019, she has been unable to link up with Super Eagles stars Iheanacho and Ndidi whom she described as her role models.

“With Leicester, Wilfred Ndidi and Kelechi Iheanacho have been good role models for me,” Plumptre told BBC.

“It’s funny we haven’t met but that’s all because of Covid but at some point hopefully we’ll be able to meet each other.”

Plumptre has featured for various England youth teams but she is still eligible to represent Nigeria through her father and hopes to get a chance to play for the Super Falcons in the future.

“The idea of me being able to play for Nigeria, with that being an option, I would happily grab that with both hands,” she continued.

“What representing something that really means to somebody is very important. Obviously, there’s a lot of things I can openly say that I don’t know about Nigerian culture but I want to learn because I know that it’s in me, and it’s in my sister and in my dad.

“We can only get it from my grand dad, he’s the only thing that we know in terms of Nigeria. I’ve obviously visited Nigerian relatives in America and in England.

“Seeing this little journey my sister and I have been on, and the understanding of our family heritage, not just that but watching Nigerian documentaries and learning about the past is incredible.”

Plumptre also hailed the quality in the Super Falcons squad and praised Asisat Oshoala for her exploits abroad.

“When you look around there are several Nigerian players playing at the top level of the women’s game,” she pointed out.

“With the Super Falcons I have been following them and the continued progress the team is making. But one player that I remember is Asisat Oshoala.

“She was at Liverpool when I played for Notts County, then I was about 16 and the big thing was having Oshoala over at Liverpool.

“That was the big name and then she obviously went to Arsenal. And everybody knew of her and how talented she was. For me as an English person, she was Nigerian football to me.”