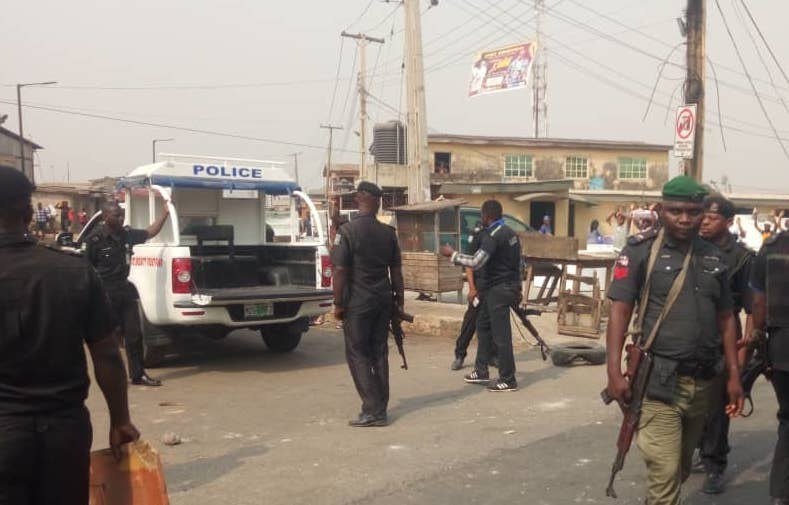 A yet-to-be-identified commercial motorcyclist was on Thursday morning, shot dead by a security operative along Orhuwhorun Road in the Udu council area of Delta state.

A mob immediately set ablaze the police vehicle following the shooting and subsequent death of the okada rider.

The incident, according to a report by Nation, occurred at the junction of God’s Delight Assembly (alias Free Indeed), close to the Police Post at 11:30 am.

Witnesses claim the Okada rider was shot dead by a policeman over N100 illegal charge.

Some other reports, however, claim that the victim was shot dead by a vigilante operative working with the police.

It was learnt that policemen and vigilante operatives mount roadblocks around the area daily, demanding the said sum from commercial motorcyclists and tricyclists who ply the route, while carrying out stop and search duties.

“A policeman just shot one Okada man at Free Indeed Junction. The police vehicle is burning right now. The Okada men are protesting here. The corpse has been taken to the Ovwian police station,” a source disclosed.

The incident has reportedly caused serious tension among residents of the area.

It was gathered that there is a heavy military presence at the Udu Express Junction, which leads to the Police station.

Following the incident, a mob was said to have made a move to destroy the Ovwian Police Station but were stopped by the military operatives who were deployed in the area.

The police were yet to issue a statement on the incident.