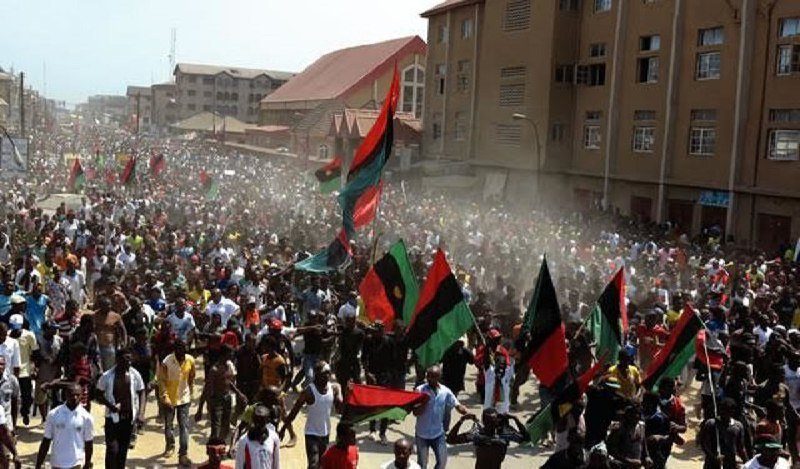 The Indigenous People of Biafra (IPOB) has threatened the Federal Government over its warning not to appear in court on Monday during the hearing of the suit filed against its leader, Nnamdi Kanu.

The group in a statement told President Muhammadu Buhari government to be prepared to shoot and kill many of them on Monday.

IPOB members vowed that the warning of the federal government would not stop its members and other Biafrans from flooding the court.

Recall that the Attorney General of the Federation, Abubakar Malami, had warned members of IPOB to stay away from the court on Monday.

Malami also warned against the display of branded IPOB T-shirts or caps around the court premises.

Nnamdi Kanu who was extradited from Kenya will appear in court on Monday.

The spokesman of the group, Emma Power stated this while speaking with Newsmen, “The federal government of Nigeria has no right to stop IPOB or Biafrans from coming to Abuja to witness the court proceedings or to show solidarity to our leader, Mazi Nnamdi Kanu. Nigeria government cannot beat a child and force him or her not to cry. IPOB has every right to be in court on that day,”

“Anybody who doesn’t want to go to court is free to do so but Malami and Federal Government of Nigeria have no powers or rights to stop anybody from going to Abuja.

“One thing they forget is that it’s not about Nnamdi Kanu, it’s about Biafra. The issue of Biafra agitation has since gone beyond Nnamdi Kanu. It’s now an unstoppable mass movement.

“The truth is that not just IPOB members but thousands of Biafrans and their sympathizers will flood Abuja on Monday to show solidarity to our leader, Nnamdi Kanu. He is only a freedom fighter and Nigeria cannot stop people from identifying with him.

“So, if they want to shoot or kill people they should prepare very well because they will have enough to kill or arrest.

“We are not afraid and can’t be afraid at this point of our journey when our freedom is at the threshold. We can’t abandon our leader.

“The only thing is that we shall be very civil, organized and peaceful but we can’t be cowed. The world will see how they kill innocent citizens that day in Abuja,” he added.