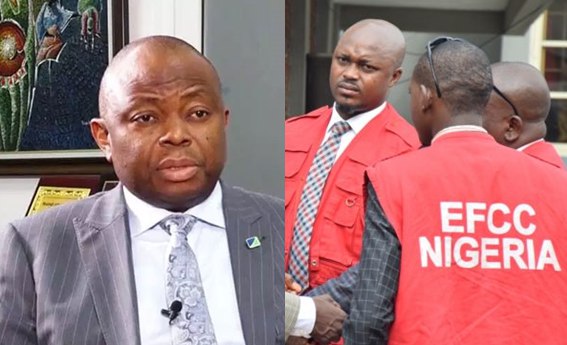 The newly appointed Managing Director of First Bank of Nigeria Holdings Plc, Nnamdi Okonkwo, has denied being arrested by the Economic and Financial Crimes Commission (EFCC).

Premium Times had reported that Okonkwo was arrested and grilled over his alleged role in the transfer of $153m linked with embattled former Petroleum Minister, Diezani Alison-Madueke from the Nigerian National Petroleum Commission.

Back in 2017, the EFCC had accused Okonkwo of helping the former minister take the money and keep $40m with the former Executive Director, Public Sector Accountant, First Bank Plc, Dauda Lawal.

But in an interview on Monday with The Source magazine, Okonkwo refuted reports that he was arrested by the EFCC over an alleged money laundering.

The former Managing Director of Fidelity Bank Plc described the news of his arrest as false and baseless, asking the public to disregard the report.

Okonkwo added that he was with his family over the weekend and was never arrested as claimed by several media reports.

He said: “I cannot be in my bedroom and somebody somewhere will be saying, EFCC has arrested me and that I have been in the custody of the anti-graft commission for days.

“I have been enjoying myself with my family, apart from going to the gym to keep in form.

“I have also held a series of meetings with my new employer in the last few days. So, I don’t understand what Premium Times is saying. I can’t be in EFCC custody and they will allow me to speak to you.”

Anaedoonline.ng reports that Okonkwo had recently taken over from Mr U.K. Eke as the group managing director of First Bank of Nigeria Holdings.

First Bank had in a statement released to newsmen said that Okonkwo would resume his duty from January 1, 2022 following the retirement of Eke which will take effect on December 31, 2021.

According to the statement, Okonkwo’s 30 years of banking career spanning local and international experience would be of great value to the board.

His appointment is subject to the approval of regulatory authorities, according to the statement.