Ossai Ovie Success, an aide to the Delta State governor, Ifeanyi Okowa has called on Davido to give out his cash gift of over N100M for charity works.

Davido who received over N100M from fans and fellow celebrities in a space of hours stirred up various reactions on social media.

According to Ossai, instead of using the money to clear his Rolls Royce, OBO should give out the money for charity purposes reason being that a lot of people are suffering.

“Davido should donate the over 100M he has gotten to charity instead of using it to clear his Rolls-Royce.

A lot of people are suffering out there.” 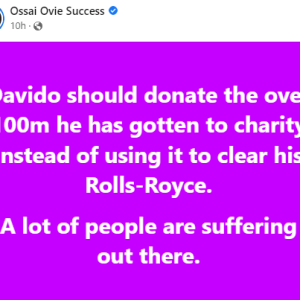 Nengi Called Out Over Alleged Romantic Affairs With Davido