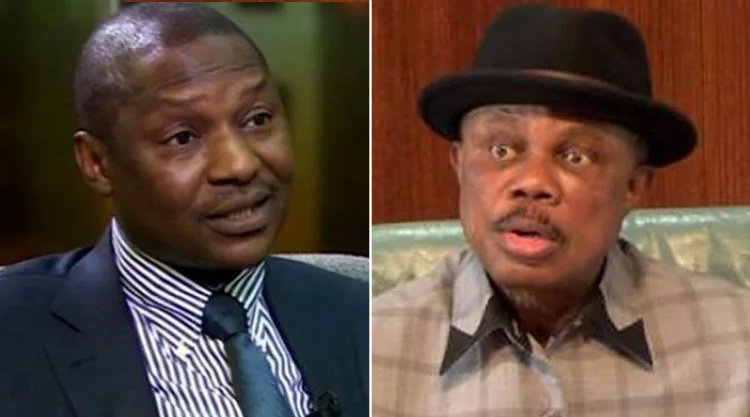 The Minister of Justice and Attorney-General of the Federation, Abubakar Malami (SAN), has said he is not aware that the Economic and Financial Crimes Commission (EFCC) has placed Governor Willie Obiano of Anambra State on a watchlist.

Recall that the anti-graft agency decided to place the governor under the watchful eyes of the Nigeria Immigration Service (NIS) ahead of the expiration of his tenure.

In a letter to the Comptroller General of the service dated November 15, 2021, the EFCC said it decided to place Obiano on the watchlist in order to prevent him from travelling out of the country.

Responding to the development, the Anambra State government accused disgruntled politicians of using the anti-graft agency to attack Obiano.

The state government also accused Malami of using his office against the governor, an allegation he quickly denied.

Speaking on Wednesday in an interview on Channels Television, Malami once again denied the allegation by the Anambra government that he is behind the move to place Obiano on the EFCC watchlist.

The minister also refuted claims that he always interfere in the EFCC’s activities and use the commission to witchhunt opposition members.

Malami stated that the anti-graft agency is established by law and its responsibilities are demarcated by law.

“I am in all sincerity not aware and I don’t have to be aware because the EFCC is established by law and its responsibilities are demarcated by law,” he said.

Malami, however, described as ridiculous, the claim that he was a member of the campaign team of the All Progressives Congress and its candidate, Senator Andy Uba, in the recently concluded Anambra governorship poll.