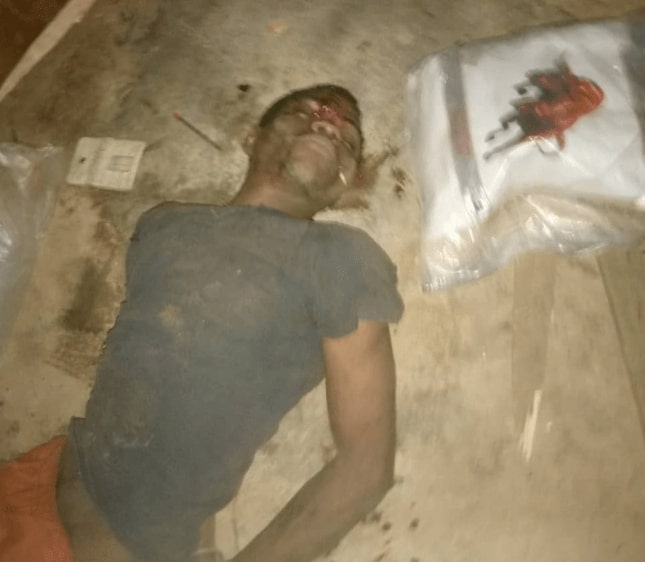 Luck ran out for a petty thief identified as Michael Oluwale in the early hours of Monday December, 13 2021 at about 1:48 am when the vigilante caught him stealing a five kilogram bag of rice from a rice store at Alagbado area in the outskirts of Lagos.

Oluwale, it was learned, broke into the ceiling of the raw food shop on Yusuf Street, opposite Kola new market and stole the bag of rice.

A vigilante member had observed some noise in the ceiling of the shop, and rallied other colleagues to the shop where they observed the broken ceiling that served as an entry point to the thief.

It took the vigilante members about an hour to break the locker of the shop where they saw the thief hiding. He was tied and kept till dawn when the owner of the shop came to her shop.

According to one of the vigilantes, the decision of the shop owner will determine whether to hand him over to the police.

Ibrahim Jibril Ikowe, the reporter, who was on ground reported that the vigilante members’ opinions were divided as whether to treat the case as that of an hungry person looking for food, or a robber since all he stole was a 5kg bag of rice.

They however agreed to wait till morning when it will be ascertained whether the shop owner lost any other valuables like cash.

Residents of the area said they had witnessed similar incidents in the past with no one able to trace the source.

See How Luck Ran Out On A Drug Dealer

A trader simply identified as Mr Biggy thanked God for revealing the secret of the thief.

“Imagine that little space in the ceiling he was able to enter the shop through. This is why many people now use iron rods before erecting real ceilings”, he said.