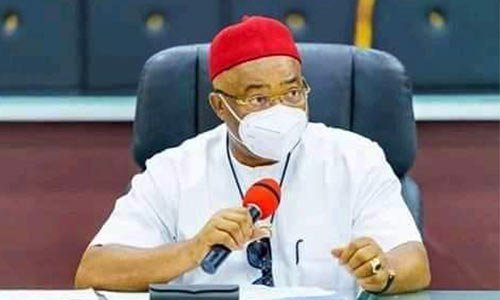 The All Progressive Grand Alliance (APGA), has carpetted Governor Hope Uzodinma of Imo State over comments on the party and its leadership.

Recall that Governor Uzodinma, had in page 70 of his new book titled “Reflection on Igbo Question, given reasons for ruling out All Progrwssive Grand Alliance as a major party that can win the presidency, and likened the ruling APGA in Anambra state to a tricycle or Keke Napep.

He had said the party will never come close to federal power or winning the presidency for the Igbos.

Uzodinma had also claimed that APGA had no political future as the party is generally viewed as a regional party since its founders labeled it an Igbo party.

But reacting to Governor Uzodinma’s outbursts, APGA in a press release signed by its National Publicity Secretary, Tex Okechukwu on Wednesday, dismissed the assertions of the Imo governor, reminding him that APGA is the only political party that is more grounded and formidable in Nigeria despite its limited financial resources.

The party national leadership also described the imo governor as an interloper and fortuitous and naive politician for describing APGA as a party without political future in Nigeria.

APGA told Governor Uzodinma that it has demonstrated systematic monumental progress in Nigerian political history and as well as changed narrative of governace in the most populous country in Africa continent.

IMO STATE: The Battles Against Uzodimma

According to the party leadership, ” APGA is the only political party in Nigeria to build, own and occupy its own Secretriate in the federal capital Abuja, replicating same in other party has including the APC where Hope Uzodinma suddenly and mechanically emerged from”.

The APGA also maintained that it had won elections all over the country including Imo State where capricious Richard Okorocha won the Imo State gubernatorial seat under her platform, and ungratutiouly defected to the All Progressive Congress.

“APGA is the most formidable, transparent and Democratic party that upholds tenaciously the provisions of its party’s Constitution, electoral act and the constitution of the federal Republic of Nigeria”.

Continuing, the Party leadership said, “with APGA national leader and Board of Trustees chairman, Willie Mmaduabruochikwu Obiano and the APGA national Chairman, Ozonkpu Dr Victor Ike Oye, who are destined and determined leaders, the party has gone too far to be described by a political infantile, Hope Uzodinma as not having future.

“APGA is the only party that is too hot and sincerely transparent to accommodate the likes of Hope Uzodinma and his APGA gullible defectors, who couldn’t contain the transparency and credibility of the party; “for it is said that birds of the same feathers flock together.

GUNMEN: Those Who Attacked Imo Are Not Igbo – Uzodinma Explains

“APGA has a sincerely synchronized membership that is informed and involved in the activities of the party from ward level, local government, state level and to the national level. APGA is grounded from root to top”,it posited.

The APGA further said, “Tell Hope Uzodinma that APGA is the best party whose sincerity, crediblity and transparency is attracting honest politicians from within Nigeria and in diaspora, even decent people from his party APC to join.

“APGA is moving Nigeria forward. APGA had won elections in different states of the country from local governments states and federal legislative houses and is the only hope for the Nigerian masses not minding the frivolous and mischievous machinations by Hope Uzodinma and his co-traducers to their chagrin; to disorganize the party in the last Anambra gubernatorial election that produced Professor Charles Soludo.

“APGA is the only dream of any meaningful Nigerian politician. Hope Uzodinma’s baseless talks about APGA ends right where he said it and goes to no issue. His ascension as a senator and thereafter the governor of Imo state, has exposed his natural fraudulent manipulations, which is the biggest political scam making rounds in Nigeria and beyond which consequently launched unending crisis and insecurity in Imo state”.

The statement by APGA partly read, “The question is on what basis or with what statistics is this unfounded and uninformed vituperative assessment based on.

“In the first place,who was Hope Uzodimma before becoming a senator, and thereafter a governor? Well let’s not waste our time on his antecedents or biography since it is a common knowledge to all and sundry, Let us delve into his uniformed political deficiency.

“Does Uzodimma know what a political party is, or has he ever participated in the formation of any? the answer is no!.

He started his political carrier with intrigues that rigged him into the senatorial seat, repeated same to his current position and even wanted to replicate same with his cohort Andy Uba in Anambra State but failed hopelessly.

“This is consistently reverberating and distorting every of his being, particularly now that Andy Uba has received the last bang by federal high court Abuja disqualifying him as APC gubernatorial candidate.

Gov. Uzodinma Blast IPOB Over Comments Of Controlling The People Of Imo State

“Let me educate and acquaint Uzodimma a little with APGA’s superiority, unfuri, movement and proliferation . APGA is the only political party that has altered the rudimentary political trajectory in Nigeria”.

See How Much Dollar Exchange To Naira Today 22 December 2021