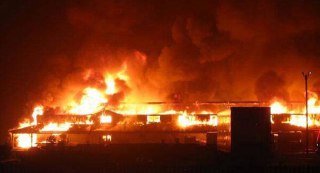 Many are feared to have lost their lives in an explosion that rocked a petrol station in Awka, Anambra State.

The number of casualties was yet to be ascertained.

Also, cars parked in the petrol station were gutted in the resultant inferno.

The fire was still raging at the time of writing this report.