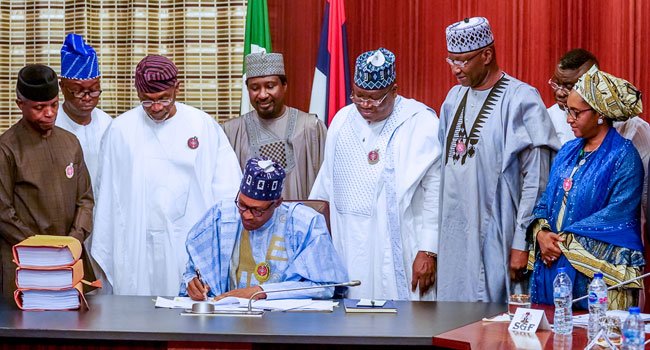 The National Assembly has transmitted the 2022 Appropriation Bill to the President, Major General Muhammadu Buhari (retd.), for assent.

The House of Representatives and the Senate passed the Federal Government’s budget on Tuesday and Wednesday last week, respectively, raising the total estimates from the proposed N16.391tn to N17.126tn.

The oil benchmark was raised from the proposed $57 per barrel to $62.

President of the Senate, Ahmad Lawan, had said the budget would be transmitted to Buhari by Thursday.

A communication from the Clerk to the National Assembly, Ojo Amos, to the Presidency, a copy of which our correspondent sighted on Tuesday, showed that the budget was transmitted on Friday and received by the Office of the Chief of Staff to the President on Saturday.

The letter of transmission, with Reference Number NASS/CNA/37/Vol.1/35, was addressed to the President and Commander-in-Chief of the Armed Forces of the Federal Republic of Nigeria and titled ‘APPROPRIATION BILL, 2022.’

It read, “In consonance with the Provisions of the Acts Authentication Act Cap. A2, Laws of the Federation of Nigeria, 2004, I wish, with due respect, to forward to Your Excellency, the authenticated copies of Appropriation Bill, 2022, for your consideration and assent.

“After Your Excellency’s assent, one copy of the signed bill should be retained in your office while the other two are to be returned for our further action, please.

“With my highest regards.”

The National Assembly had with the 2022 budget returned the country to a January-December budget cycle.

Buhari had signed 2021 Appropriation Bill into law on January 1, 2021, while it’s life cycle was expected to expire on December 31, 2021 (Friday) but for the recent extension of the lifespan of its capital component three months by the National Assembly.

The President is expected to assent to the money bill by Saturday.