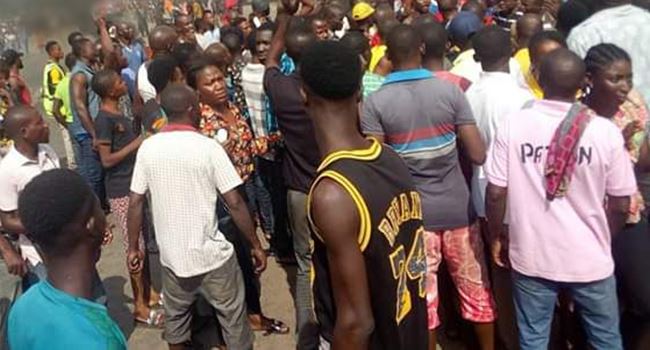 The General Overseer of Wings of Blessings Africa Church, James Mugo has reportedly landed in the hospital after he was allegedly beaten up by members of his church.⁣

According to reports, the Kenyan pastor had demanded ksh.4200 (approximately 16 thousand naira) from every member of the church on New Year eve service to offer prayers to God for them to unlock the new year’s blessing

The clergyman then went on to threaten the members that failure to pay the money, would lead to a cursed 2022.

Angered by the demands of the pastor, argument ensued which reportedly led to the angry members attacking the pastor.

Pastor Mugo landed in a hospital in Embu, a municipality in Kenya, after sustaining serious injuries.

In another story, a live streamed video of a Pastor seen carrying out a bizarre crossover ritual for his church members recently surfaced on social media.

In the viral video, the yet-to-be identified pastor was seen asking his church members to hurry up and come for the “holy bath”.

The church members were captured tying towels while being rubbed olive oil by the pastor and his ministers after the bath.

Speaking about the service, the pastor claimed that he got the directive from above and knows it might cause controversy even though he has no option than to obey the spirit.

Local news platforms in Ghana reported that the Pastor engaged in the ritual to cleanse his members so they will be “holy and pure”‘.