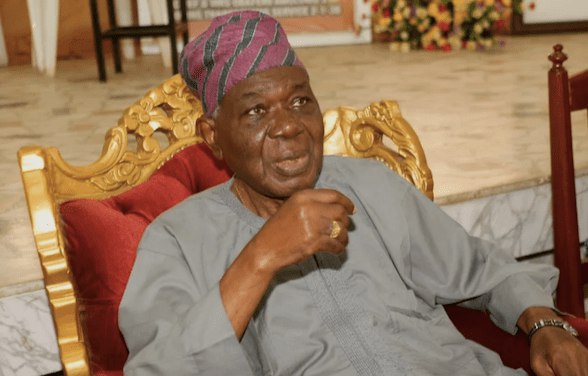 President Muhammadu Buhari has erxpressed sadness over the death of the former Head Of State, Chief Ernest Adegunle Oladeinde Shonekan.

In a condolence message released by his media aide, Femi Adesina, on Tuesday, the President expressed deep sadness over the demise of the former Nigerian leader.

Buhari said Shonekan left his flourishing business career to become the Head of Government when the country needed someone to save the nation from “sinking”.

The president said Shonekan demonstrated his love for the country and commitment to her development, peace and unity until his death.

He, therefore, consoled the widow of the former leader, Mrs. Margaret Shonekan and the deceased’s family, saying his service to the nation would never be forgotten.

The statement reads: “President Muhammadu Buhari has received with profound sadness the news of the death of a great statesman and former Head of the Interim National Government, Chief Ernest Shonekan.

“On behalf of the Federal Government, the President extends deepest condolences to Chief Shonekan’s wife, Margaret, loved ones, as well as the government and people of Ogun State.

“As an internationally-respected statesman, President Buhari affirms that, with courageous wisdom, Chief Shonekan left his flourishing business career to become the Head of Government, at a delicate time when the country needed someone of his calm mien and pedigree to save the ship of state from sinking.

May 28, Top National News You Need To Know

“The President notes that Chief Shonekan demonstrated to all that the love for country and commitment to her development, peace and unity transcend the trappings of office and the transient nature of political power.

“President Buhari believes that Nigeria owes a great debt to Chief Shonekan, the peacemaker, who even at the twilight of his life never stopped believing and working for a prosperous and democratic country.”