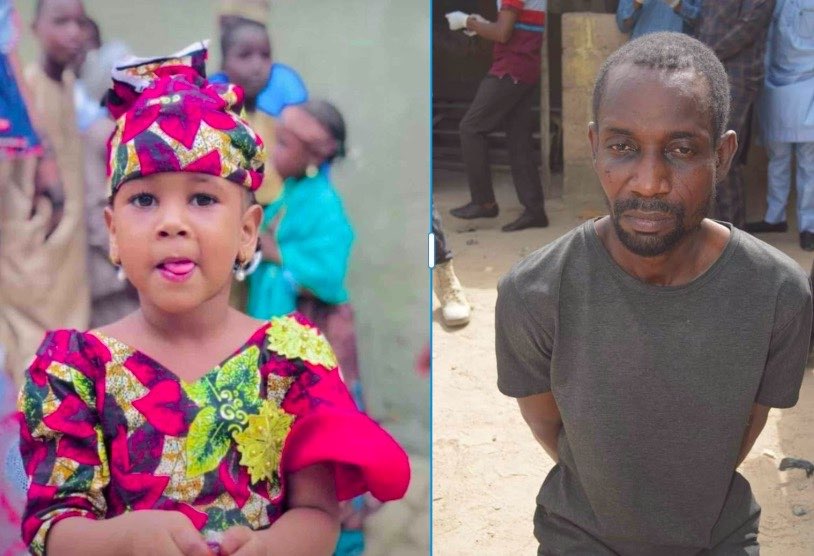 The Kano State Police Command has arrested three suspects in connection with the abduction and murder of a five-year-old schoolgirl in the state, Hanifa Abubakar.

This was just as the state government ordered immediate closure of the private school, Noble Kids Academy, at Kwanar Dakata, Nasarawa Local Government Area of the state, where Abubakar was reportedly secretly buried by the suspects.

The police on Thursday arrested a 30-year-old man and teacher in the school, Abdulmalik Tanko, and his alleged accomplices, Hashim Isyaku, 37 and 27-year-old Fatima Jibreel.

The spokesperson for the police in the state, SP Abdullah Haruna, who made the disclosure in a statement, said the suspects were arrested by a team of the Department of State Services in Kano State.

According to the statement, sometime on December 4, 2021, around 8.30pm, a report was received from a resident of Dakata Quarters, Nasarawa Local Government Area of the state that Abubakar was kidnapped and a ransom of N6m demanded.

Following the report, the state Commissioner of Police, Sama’ila Dikko, was said to have met with heads of security agencies in the state and mobilised a team of Operation Puff Adder, led by one SP Shehu Dahiru, to ransack hideouts and arrest the culprits.

The statement read, ‘’Sustained efforts and prolonged follow-ups led to the arrest of one of the culprits, Abdulmalik Mohammed Tanko of Tudun Murtala Quarters, Nasarawa LGA, Kano State and one Hashim Isyaku of the same address. On commencement of investigation, Abdulmalik confessed that, the victim, Hanifa, was his pupil at a private school in Kwanar Dakata, Nassarawa LGA.”

The statement quoted Tanko as saying that he poisoned the victim when he realised that she recognised him.

‘’I kidnapped her and took her to my house from where I contacted her relatives and demanded a ransom of N6m. On December 18, 2021, having realised that, the victim recognised me, I poisoned her to death, conspired with one Hashim Isyaku, took and buried her in a shallow grave located at the private school in Kwanar ‘Yan Gana, Tudun Murtala Quarters,’’ Tanko was quoted as saying.

Also, the statement noted that Isyaku confessed that sometime in November 2021, Tanko met with him and one Fatima Jibreel of Layin Falaki Tudun Murtala Quarters and ordered them to kidnap Abubakar, adding that they agreed but later rescinded their action.

The statement added, “Moments after their arrest, the suspects led a combined team of DSS operatives and Operation Puff Adder to the scene of the crime from where the body of murdered Abubakar was exhumed and rushed to the Mohammed Abdullahi Wase Specialist Hospital, Kano; examined and confirmed dead by a medical doctor and subsequently released to the relatives for burial according to Islamic rites. On completion of investigations, the case would be taken to court.”

There was a mild drama at the police command on Friday when Fatima Maina, mother of the murdered pupil, sighted the school owner.

The parents of the victim were the first to arrive at the police Command before while Tanko and other suspects were brought in by the police, amid tight security.

Immediately Fatima sighted Tanko, she charged towards him, raining abuses, slapping and kicking him and demanded why s, he killed her daughter.

Meanwhile, the Kano State Government has ordered immediate closure of the school.

The state Commissioner for Education, Muhammad Kiru, announced the school closure in a statement on Friday.

Kiru, who expressed sadness over the incident, said the state government would commence investigation of unregistered private schools and teachers to check such criminal activities. He appealed to parents whose children attend private schools to stop them from doing so pending the completion of investigation.

Also, the state governor, Dr Abdullahi Ganduje, on Friday assured that government would continue to monitor and ensure the prosecution of anyone found culpable in the kidnap and murder of the pupil.

Two Pastors Arrested By The Police Over ESN Attack On Operatives

In a statement by the state Commissioner for Information, Mmuhammad Garba, the governor was quoted as saying measures already taken in the matter included the indefinite closure and withdrawal of the school’s operational licence.

According to the statement, government is disturbed that those entrusted with the care of children turned out to be their murderers.

Ganduje noted that the state government was in regular contact with the bereaved family and continued that justice prevailed in the case to serve as a deterrent to others.

The statement noted that the governor, who commended security agencies in the state for their prompt action which led to the arrest of those allegedly involved, stated that while investigation was in progress, the state government would pursue the case to a logical conclusion.

Ganduje, according to the statement, commended the international community, human rights-based organisations, including patriotic Nigerians for the expression of concern in the incident.

Besides, Ganduje equally assured security agencies of government’s support in carrying out their duties of ensuring that Kano sustains relative peaceful co-existence