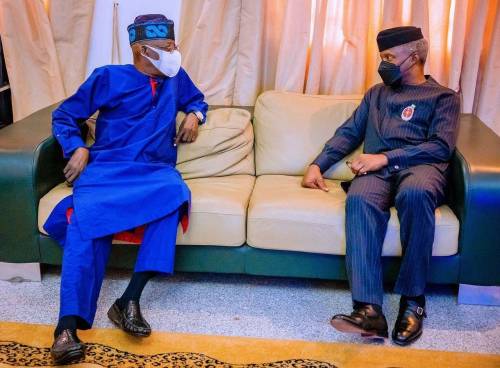 Vice President Yemi Osinbajo has been dubbed “Judas in the Bible” by a women’s support organization called the Asiwaju Women Cooperative Society of Nigeria (AWCS), which believes he is doomed to fail following his presidential proclamation.

In an address on Monday, Osinbajo vowed that if elected President in 2023, he will finish the job started by President Muhammadu Buhari.

The vice president stated that he will concentrate on building a digital economy, bringing 100 million people out of poverty, and improving security, among other things.

Reacting to Osinbajo’s presidential declaration which has caused unease in the camp of Asiwaju Bola Tinubu, the national leader of the ruling All Progressives Congress (APC), the AWSC national president, Mrs. Toyin Badmus, in a Facebook post, described Osinbajo’s declaration as the “reenactment of Awolowo vs Akintola in the old western Region,” adding “The traitor always loses…. Yemi is the traitor.”

While congratulating Osinbajo on his declaration, Badmus, who is a businesswoman, politician, and the Iyaloja of FCT (head of traders), said: “I hope you’re not relying on ASIWAJU structure. Even your people in Ikenne don’t want you.”