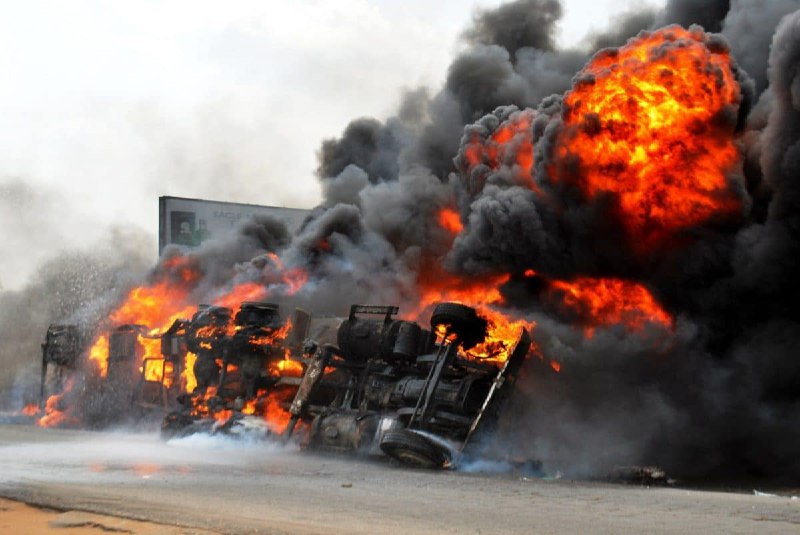 According to Anaedoonline.ng, an early Friday morning fire has sparked turmoil in Alagbodo, which is located along the Lagos-Abeokuta Expressway.

According to accounts, the roaring fire began after a fuel-laden truck crashed and exploded in the region.

A large number of residences and stores are said to have burned down, with properties worth millions of dollars being lost in the process.

The fire is said to have begun at 3 a.m., while the residents were still asleep in their home.

The fire was said to have started when some miscreants scooped fuel from the stricken tanker.

Emergency personnel, including firemen from the Lagos State Fire Service, are already on the site combating the fire and salvaging additional properties, according to reports.

Meanwhile, a fire destroyed the Central Bank of Nigeria (CBN) branch in Benue State on Thursday.

In a video found online, a part of the apex bank in Benue State was shrouded in smoke, according to Anaedoonline.ng.

The fire was said to have begun in the building’s fuel dome, although it did not spread to other areas.

The first incident at the apex bank created tension at the bank, which is located in Makurdi’s Old GRA across from the United Bank of Africa (UBA).

He further stated that he received a call informing him about the fire and he immediately drafted his men to the scene.

Ikyaaza said, “It was actually a huge fire which started at the company’s fuel dome but my men rushed to the scene and put out the fire before it could spread to other parts of the bank. Everywhere is calm now.”