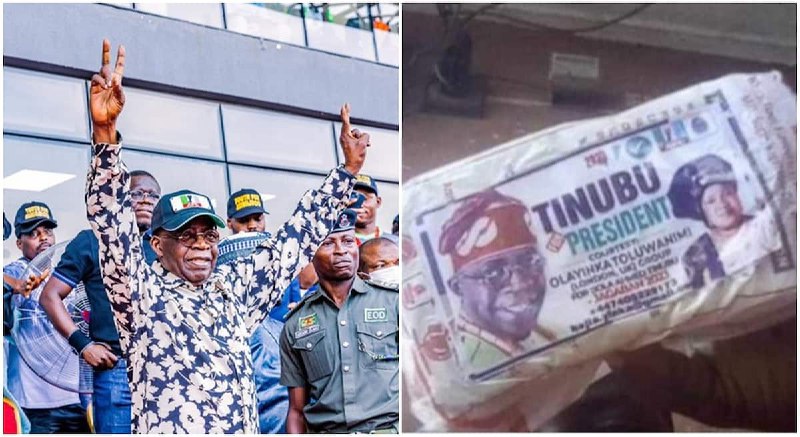 On social media, a snapshot of an average-sized loaf of bread with an image of All Progressive Congress (APC) National Leader Asiwaju Ahmed Bola Tinubu has generated a sensation.

The emblem of the All Progressives Congress, APC, was caught in the images that leaked on social media, as well as a portrait of an anonymous woman thought to have sponsored the label.

This comes months after the National Leader of the ruling All Progressives Congress, APC, announced his ambition to run for president in 2023, according to Anaedoonline.ng.

The campaign food, on the other hand, has elicited amusing responses, with social media users claiming that they will eat the bread but still refuse to vote.

See some of the reactions below;

One AOpeaceofmind1 said: “I feel disrespected that you think I would sell my votes to Tinubu for this rubbish. I have so much pride for beans and bread with Pepsi.. Am I a bricklayer? Instead of Pepsi, let them use LaCasera and Fearless and I will even gather my friends to vote for Tinubu too.”

One Theoriginal wrote, “The bread is not even big. His campaign manager no no job oh. E suppose come with Ewa Agoyin. And chilled coke.”

One Prisca wrote: ‘This is definition of eat and die.”

One cruiseloadedblog wrote; “We are wise already even our parent sef don wise all this cant work anymore.”

One euphybarbie wrote; ‘We are not hungry’

Caroline Danjuma Reveals How Linda Ikeji Contributed To Her Divorce