If Putin Is Defeated By Ukraine, This Is What He Will Do – Boris Johnson Reveals 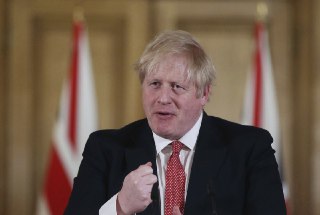 Boris Johnson, the British Prime Minister, has stated that he does not believe Russian President Vladimir Putin would use tactical nuclear weapons in Ukraine.

When asked if he thinks Putin will use tactical nuclear weapons in Ukraine if his country is defeated in the continuing conflict, Johnson responded yes.

After Russia’s Foreign Minister, Sergey Lavrov, stated on Monday that his nation may use chemical weapons, the Prime Minister responded during a sit-down interview with Britain’s “Talk TV.”

However, Johnson pointed out that, rather than deploying nuclear weapons, Russian President Vladimir Putin may simply back down and withdraw his soldiers since he has “political space.”

“[Putin] could come to a point, when you look and say to the Russian people: The military technical operation that we launched in Ukraine has been accomplished.

“We had to go into to accomplish certain protectors to protect the rights of certain people, that’s been done,” Johnson said.

27 April 2022: See How Much Naira Exchange To Dollar Today