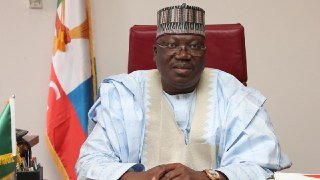 Ahmed Lawan, the President of the 9th Senate, announced on Monday that he will run for the All Progressives Congress presidential ticket.

Lawan has joined the ruling party’s long list of presidential candidates ahead of the 2023 national elections.

The Senate President is the 24th presidential candidate to choose from among the N100 million APC expression of interest and candidacy forms.

On the 30th of May, he would be seeking to capture the party’s presidential ticket ahead of Bola Tinubu, the party’s national leader, Vice President Yemi Osinbajo, and others.

The form was acquired for him at the International Trade Center by a group of his friends led by Chief Sam Nkire, a member of the party’s National Caucus, and 15 other Senators.

According to Anaedoonline.ng, Lawan’s presidential ambitions have sparked a schism in the APC Senate caucus over an apparent plot to support him as the parliament’s consensus presidential candidate.

Prior to the 2023 election, some MPs have shown support for alternative presidential candidates in the party.