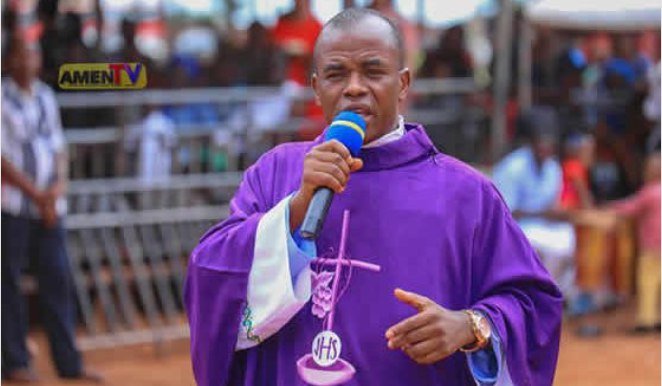 There are no intentions to assault Bishop Callistus Onaga of the Enugu Diocese, according to Rev. Fr. Ejike Mbaka, Spiritual Director of Adoration Ministry Enugu Nigeria (AMEN).

One of the parishioners, subsequently named as Elijah, threatened to assassinate Bishop Callistus Onaga of the Enugu Catholic Diocese for closing the Adoration Ministry in a viral video taken during a recent protest by members of Mbaka’s Adoration Ministry. Onaga Must Go was another slogan the protesting parishioners were heard screaming.

The Pope has previously expressed his disapproval of the situation.

According to Anaedoonline.ng, Bishop Onaga had the ministry’s operations suspended after Mbaka’s outburst in which he referred to Mr. Peter Obi, the Labour Party’s presidential candidate, as a “stingy guy.”

In contrast, Mbaka claimed in a live video posted to the ministry’s Facebook page that the Adoration ministry had no plans to assault the Bishop and that he was now on a personal retreat as a result of the controversy surrounding his outbursts.

He claims that the alleged Elijah, who threatened Bishop Onaga with death, is a known mental patient and shouldn’t be taken seriously.

He said, “I wish to do a disclaimer over the utterances that are going round that Adoration people planned to attack Bishop Onaga. It is not true. The man called Elijah who made the dangerous utterance, is a certified and verified psychiatric patient.

“Elijah used to be naked but by the grace of God, he now wears clothes. He is known for threatening people even though after the threat, he will not do anything. That is his own way of making money from people.

“He has said several times that he wants to remove Bishop Onaga and become the Bishop of Enugu Diocese. Is this the person you can regard his utterances? No attack or plan to attack the Bishop from the Adoration Ministry. Whoever is thinking of that, I wash my hands off it”.