2023: See How Nigerians Reacted As Fayose Move To Dumps Atiku 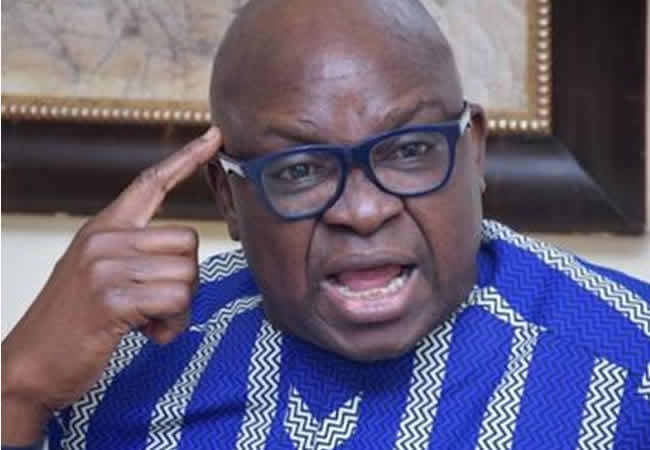 Reactions have lagged behind Ayodele Fayose, a previous PDP candidate for president, supporting a presidency in the South.

According to Anaedoonline.ng, the former governor of Ekiti State said on Wednesday that following Muhammadu Buhari’s two terms as president, the south would provide Nigeria’s next president through his verified Twitter handle.

The PDP leader also made a suggestion that he might not support Atiku Abubakar, the party’s nominee for president.

It’s the turn of the south or nothing, Fayose declared, using a Yoruba phrase increasingly associated with Bola Tinubu, the APC’s presidential candidate.

In his tweet, he vowed to shortly provide Nigerians with further information.

Fayose wrote: “The PDP Constitution provides for a rotational Presidency. Section 3(c) provides that the Party shall pursue its aims & objectives by “adhering to the policy of the rotation & zoning of Party & Public elective offices in pursuance of the principle of equity, justice and fairness.

Reacting to the declaration, a twitter user identified as DISTINGUISHED Everest wrote; ‘‘No argument. But if it is not South East, then it is not equity or justice. You can’t choose half equity. Igbos have never had a Vice or president since 1999.”

One Flames of God wrote; ”Sir, @GovAyoFayose, I support you 100%. However, we should not say lagos landlord lokan oo. Sir, kindly work for Mr Peter Obi. Will be waiting for you to collapse your structure for the success of Mr Peter Obi. Adesida writes from Akure, Ondo State.”

One Wright wrote; ”What? You’ll go support Tinubu? As you all pretend like you like justice, fairness and equity, remember the SE is being deliberately prevented from producing the president of Nigeria.”

One Ojnasonic wrote; ”This current president is from APC , you can’t rotate what you don’t have. Get power first before talking about rotation, and if you’re talking about fairness it should be SouthEast so I challange you to support Peter Obi for that fairness and Equity.”

One Early man wrote; ”In 2019 when PDP zoned or abi rotated presidency to the North, did they have it? But,you’re right in your last line. Peter Obi is the right person to vote for 2023 presidency whether we do competence/ zoning. Nigerians have decided that we will give ourselves a chance to survive.”