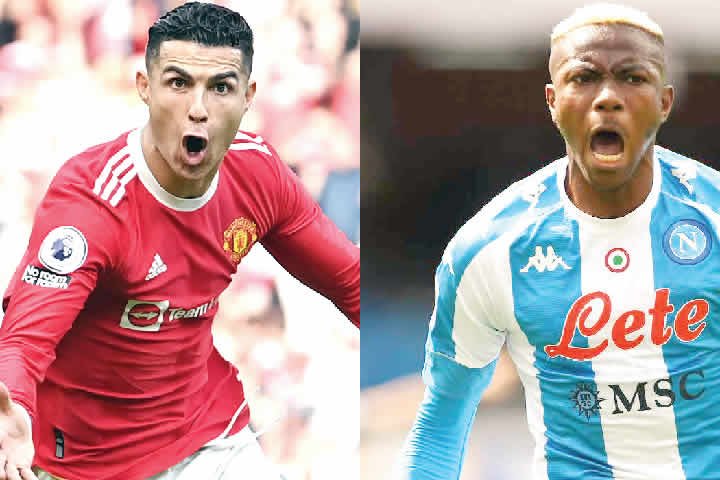 As the transfer window draws to a close, speculations of a massive deal including the signings of Cristiano Ronaldo and Victor Osimhen by Napoli and Manchester United have thrust the Nigerian striker into the centre of the newest controversy.

Osimhen, a player for Nigeria, seemed irritated by the claims that Ronaldo would move to Napoli, as Corriere dello Sport wrote on Monday.

According to reports, the 23-year-old is dissatisfied that the presence of the five-time Ballon d’Or winner may severely reduce his playing time for the Italian team.

Osimhen wants to stay in Napoli, where he feels he can play an important role during the long and challenging 2022/23 season and prefers to remain at the centre of the attack.

According to the report by Corriere dello Sport, “Osimhen, the main character to the whole transfer story, is also waiting and a little annoyed but with a clear mind.”

According to Tutto Sport, the Red Devils are expected to make an offer worth €120m to hire the services of the Nigerian striker in the summer transfer window.

However, Napoli head coach Luciano Spalletti has said Osimhen does not want to leave the club for Manchester United because he wants to play in the UEFA Champions League.

“He cares about his teammates; he chases down opposition players to help out and is a very strong focal point in attack. Having him at our disposal with that mentality is the best we could ask for.”

Osimhen has also attracted interests from the likes of Arsenal, Tottenham and Bayern Munich this window, but he remains a Napoli player ahead of Thursday’s transfer deadline.

However, Spalletti has also said it will be difficult for the club to reject the staggering €100m Manchester United reportedly look to offer the Italian giants for Osimhen before the end of the transfer window on Thursday.

Serie A: Napoli To Build Squad Around Osimhen

“I don’t have time to think about these things, we have a game every few days. Is the club thinking about it? The club thinks of any situation that is of interest to our players,” Spalletti was quoted by Football Italia as saying.

“The club thinks of any situation that is of interest to our players,” he told DAZN. “I say that if a club offers you €100m, it is not easy to say no. Since I arrived here, all the players have been on the market for the right price.”

The former Lille attacker has also been touted as a possible makeweight in a swap deal involving Ronaldo, who is also seeking Champions League football.

Spalletti, despite admitting that there was nothing “concrete” about the reports of a potential move by both players to the other direction, relishes the opportunity to manage modern football’s greatest goals scorer.

Speaking at a press conference, Spalletti said, “If you’re asking me if I’d like to work with Ronaldo, I tell you no coach would say no to that. However, if we go into those areas, the journalists like to fill in for themselves, then as Osimhen’s agent said, there are no negotiations.

“De Laurentiis (Napoli boss), he told me that he received no offer, so let’s remain as realistic as possible here and take into consideration only things that could happen.

“There are only a few days left in the transfer window, it seems unlikely that could go through. There is nothing concrete at the moment.

“It wouldn’t be a swap, it would be two different signings, in that case. One of the two can turn a game by himself. But in any case, at the moment we should not consider things that won’t help us pick up three points in Florence.”

But according to Gazzetta dello Sport, there are still talks of Ronaldo’s arrival at Napoli with or without an Osimhen swap taking place.

Ronaldo’s agent, Jorge Mendes, has been working hard to meet the various needs on both sides. On Napoli’s side, he has received substantial welcome, and United have shown that they are now willing to let the Portuguese leave while Spaletti has admitted that everyone would love to coach Ronaldo.

De Laurentiis is an admirer of Ronaldo and is willing to cash in on Osimhen as well. If Osimhen’s United deal goes through, Ronaldo’s bogus £360,000-a-week wages will not be a problem for Napoli as Laurentiis plans to use Italy’s tax laws to aid his pursuit. The law provides tax cuts for Italian clubs buying foreign players from abroad – which means Napoli could save 50 per cent on Ronaldo’s wages.

But it remains to be seen if United will invest more than €100m in Osimhen and pay part of Ronaldo’s salary, following the agreement to sign Antony from Ajax, also for €100m.

Ronaldo agent Jorge Mendes is reportedly pushing for a loan deal for his client at the Naples-based club, however, Spanish journalist Edu Aguirre – who has close ties to Ronaldo – has claimed on El Chiringuito that the loan deal will not be happening.

The former Juventus man has reportedly decided against a fresh move to Serie A.

Despite the reported decision from Ronaldo not to sign for Napoli, United could still go after Osimhen but could try to drive the price lower.

He is an exciting talent and could go for less than €100m, although United have shown they are not shy to splash the cash this summer as a yet unproven Antony is costing the same at only 22 years of age from the Eredivisie.

Osimhen, on the other hand, enjoyed a rise at Lille before making his move to Napoli.

He has only gone from strength to strength in Italy and has Champions League football, including matches against Liverpool, in the group stage to look forward to.

As such, it is unclear if the Nigerian would actually accept the move to Europa League if Old Trafford were to offer €100m or €120m the various Italian media outlets have reported.

Osimhen has scored two goals and recorded one assist in three league appearances for the Partenopei this season.