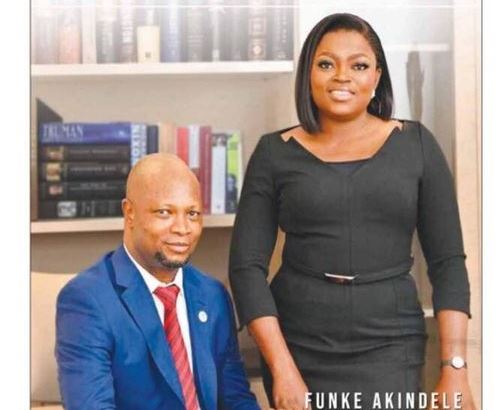 According to PDP chieftain Chief Bode George, he was not involved in making the choice of Nollywood star Funke Akindele (Jenifa) as the deputy governorship candidate for Lagos State.

He clarified that Olajide Adeniran, also known as Jandor, the party’s governorship candidate, selected her.

George said, “The appearance of Funke Akindele is a breach of agreement, and it is necessary to clear the record for future references.”

According to the initial arrangement, Jandor was supposed to select Gbadebo Rhodes-Vivour as his running companion rather than Funke Akindele, he said.

According to Anaedoonline.ng, the PDP leader spoke candidly with News Central during a conversation in which he denied orchestrating Rhodes-choice Vivour’s to join the Labour Party (LP).

“After their presentation here in my office, we saw that these were the best two we have (Gbadebo Rhodes-Vivour and Adediran), and we asked him (Adediran) pointedly here, would you work with this man as your deputy, and he said, ‘yes sir,” he said.

“Haven’t paid for the price of the form, for us to have a seamless primary, would you take him to be your running, mate, he answered ‘yes sir.”

George narrated further that it was after their discussion that Jandor later came to meet him that his mentor wants him to pick a female from Ikorodu as running mate.

In his words, “After that, he came to me to say his mentor, Denrele Ogunsayan asked him to choose a deputy from Ikorodu, a woman. I told him why didn’t tell me at the time. I’m saying this now for history because that was what transpired. I have heard rumours that I am the one sponsoring Gbadebo.

“He (Adediran) reneged on the agreement. I had to call Gbadebo’s father to tell him that this is getting a bit too dangerous. We as leaders did our utmost to ensure that we have a very seamless primary.”