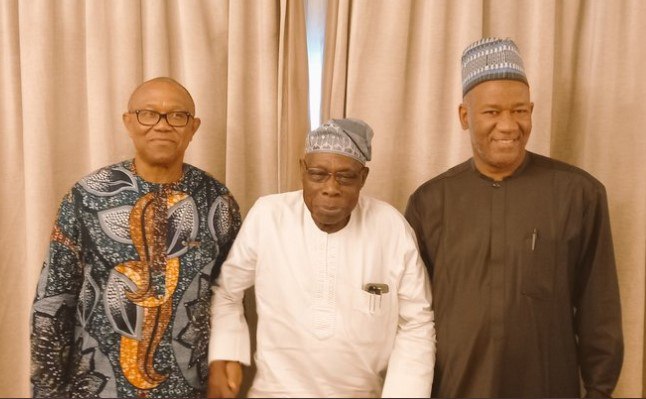 President Olusegun Obasanjo’s support for Mr. Peter Obi, according to the presidential spokesman for Asiwaju Bola Ahmed Tinubu in the southeast, Dr. Josef Onoh, has been compared to Obasanjo’s vain attack on former President Goodluck Jonathan when running for a second term.

Onoh added that Obasanjo’s support for Obi was a clear deviation from the statesmanlike position the former president had claimed to be in 2015 when he openly tore up his membership card for a political party and declared himself to be nonpartisan.

Onoh expressed sadness that the former president had revealed himself as an unreliable individual whose comments should no longer be taken seriously, despite the fact that he was aware of Obasanjo’s dislike for Asiwaju Tinubu.

However, the APC campaign spokesman noted that Obasanjo’s endorsement was null and void, saying that it only served to stroke the former president’s ego. It also did not help Obi’s campaign or ensure victory for the Labour Party’s presidential candidate.

Going back in time, Onoh recalled how, despite former President Obasanjo’s criticism and annoyance of Tinubu as governor of Lagos state, Asiwaju triumphed in the leadership of the state of excellence, adding that it was not surprising that the former president did not support Asiwaju given his longstanding animus toward Tinubu.

“So, his endorsement of Peter Obi was a continuation of intolerance and attack on Tinubu which did not come as a surprise given the background of Obasanjo’s sequence of animosity against the Jagaban and so it would have been a miracle and an antithesis if Obasanjo had declared support or endorsement for Asiwaju. We’re unfazed because Tinubu is a good statesman with respect for elders and had paid several visits to Obasanjo after the end of their respective tenures in 2007.

“Obasanjo’s endorsement of Peter Obi was inevitable because he never liked Tinubu for succeeding against his suppressing obstacles and frustrations with presidential machinery. On the other side he also hates Atiku, hence to remain politically relevant in the scheme of things he chose Obi.

“Obasanjo knows his history between him and Atiku, and also how he stifled democratic dividends in Lagos state while Tinubu was Governor and so he has no better option than his endorsement of Peter obi as a way of seeking for a vulnerable and weaker personality that will become his puppet because he knows that Tinubu will not, same as Atiku, because he already has a history with them.

“Francisco Pancho Villa, the general in the Mexican revolution was a man who could march 100 miles without stopping, live 100 days without food, go 100 nights without sleep and kill 100 men without remorse. He was defeated by a group of seven riflemen who fired more than 40 rounds into his car on 20th July 1923 and his last words were: ‘don’t let it end like this. Tell them I said something.’

“Hence come February this year, Asiwaju Bola Ahmed Tinubu will defeat the Atikulated, the Obidients who could give 100 wrong statistics without verification, go 100 times on social media attacks daily without thinking, go 100 nights threatening and abusing everyone, defend terrorists without remorse. They will be defeated by Jagaban with over 70 million votes in the presidential polls and after our victory we shall be glad to tell Nigerians that both the PDP and LP did something for the purposes of letting them go home and nurse their defeat at the polls with a little bit of dignity intact,” Onoh said.