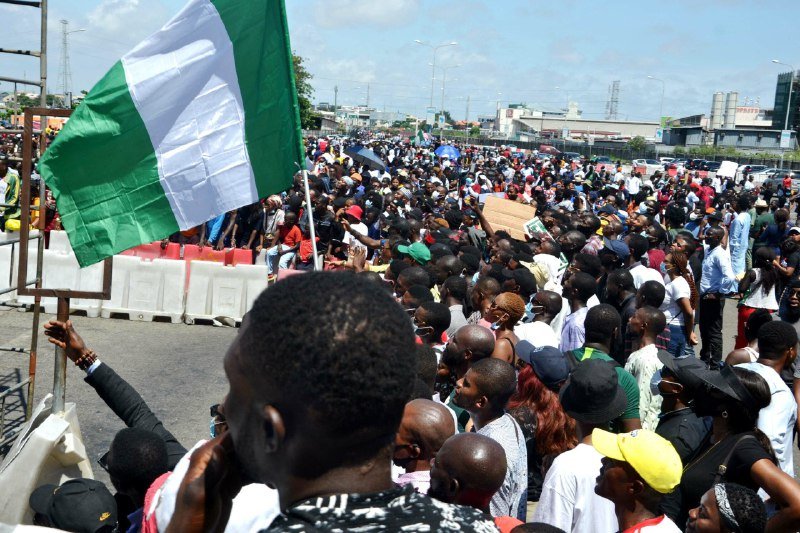 The Federal Government and the police on Thursday gave strong warnings to youths, who planned to protest at Lekki toll gate, Lagos on Saturday. 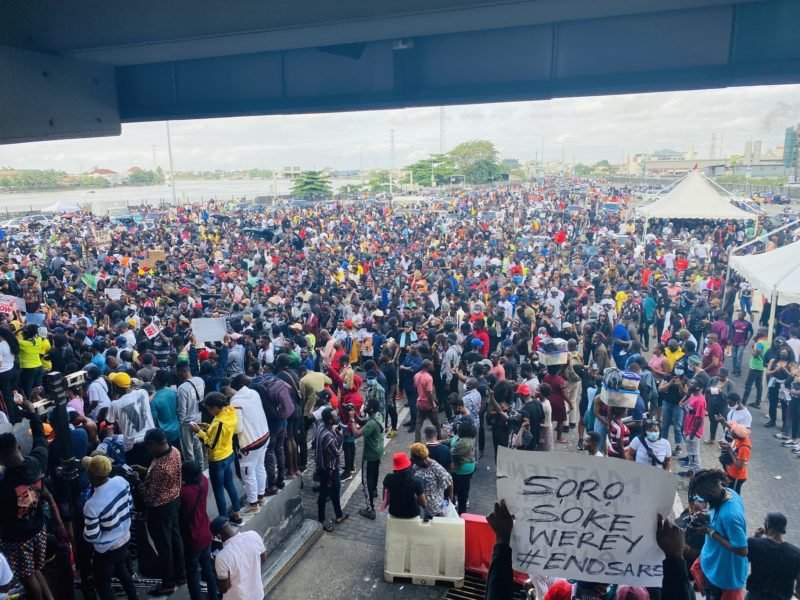 But the young Nigerians, under the aegis of #EndSARS Season 2, vowed to defy government’s order banning the protest.

One of them, Kunle Ajayi, in an interview with The PUNCH, said nothing would stop the demonstration from holding.

Another group, under the aegis of #DefendLagos had a few weeks ago threatened to organise a counter-protest at Lekki toll gate.

But Federal Government warned those behind the #OccupyLekkiprotest to desist, saying it would not allow act of violence under the guise of protests.

Also, the Lagos State Government warned that it would no more tolerate destruction of lives and property in the state.

Recall that youths protesting killings and other human rights abuses of a unit of the Nigerian Police, Special Anti-Robbery Squad, on October 7, 2020 began a demonstration tagged #EndSARS at the Lagos State Police Command headquarters.

The following day, the protest spread to other cities including Abuja, Benin, Abeokuta and Port Harcourt.

The matter came to a head on October 20, 2020, when heavily armed soldiers shot protesters at Lekki toll gate killing many people.

On Thursday, the youth said they would go ahead with their plan to stage a protest on Saturday against the reopening of the Lekki toll gate.

One of the youth, Ajayi, told The PUNCH that the protest would hold, assuring Nigerians that it would be peaceful.

He said, “Nothing can stop an idea whose time has come. We are not just calling for the protest, we are ensuring that it does not go haywire. The protest is like rain that cannot be controlled. We want a constitutional peaceful protest; the working people have agreed to make it peaceful, except the state wants to make it otherwise as they have always been doing.

“The working people will be out. We have passed through this stage before. During the #EndSARS protest, before October 20, they started killing people. The more they killed, the more the people came out. They started from Ogbomosho, went to Delta and deployed thugs in Abuja. The more the violence, the more the people will come out because they feel you cannot enslave them in their own country. It’s about the working people of Nigeria represented by the new youth, who do not even see a future, let alone having one.”

Also, organisers of the protest, in a statement on Thursday, accused the Lagos State Governor, Mr Babajide Sanwo-Olu, of seeking to cover up the alleged killing of scores of protesters at the toll gate on October 20, 2020.

The youth, in the statement, titled, ‘EndSARS Season 2: Why we will #OccupyLekkiTollGate on Saturday’, said they remained undaunted despite the threats from security agents and the state government.

They also highlighted reasons for the renewed protest.

The statement said, “After committing genocide by killing scores of people who were peacefully protesting at Lekki toll gate and other parts of Lagos, Governor Sanwo-Olu and other oppressors want to spit on the dead and dance on the blood of the innocent by reopening the gate to be collecting their blood money again.

“We say no! We are undaunted! We will be occupying Lekki toll gate again starting from Saturday, February 13. We urge all well-meaning Nigerians to storm back all the barricades, as our rulers have shown that they can never change. Since the #EndSARS, they are yet to effect any of the promises. Police brutality is still raging and SARS is still operating.

“Despite overwhelming and highly compelling evidence showing how several protesters were shot by the military, no single military official has been brought to book. Deaths have been established and many victims of the Lekki shootings have surfaced, yet neither the victims nor families of our deceased colleagues have got justice.

“After close to five months of sitting, the judicial panel meant to inquire into the Lekki massacre has refused to deliver justice to victims of the massacre most of whom have either lost their limbs due to gun wounds or have become deceased.”

The organisers also cited the high rate of unemployment among the youth and the ban on cryptocurrency, a means of income for some young people.

The group lamented the high rate of poverty in the country and the purported plan to increase petrol price to N190 per litre.

The youth called on other residents to come out for the protest.

“The Nigerian government now negotiates and enriches terrorists and bandits while chasing after, arresting, shooting and killing protesters. It is to this end that we call on you all to come out en masse to demand not just justice for victims and fallen heroes of the October 20 killings, but that all involved in this heinous criminality be brought to book,” the statement added.

As a counter-measure, youths under the aegis of the #DefendLagos announced plans to organise a counter-protest at the Lekki tollgate on Saturday.

One of the promoters of the #DefendLagos protest, Olusoga Owoeye @olusogaowoeye said, “Show your love for our Lagos. Get your friends and your neighbours to be there. Join the DefendLagos Rally at the Lekki toll plaza on the 13th of February. We will not cede our city to criminals and insurrectionists. Lagos is our pride.”

But the Minister of Information and Culture, Lai Mohammed, said government would not allow any further resort to violence in the name of #EndSARSprotest.

Mohammed, who stated this during a press conference in Abuja, admitted that peaceful protests are the constitutional rights of Nigerians. According to him, violent protests are not.

In the text of the briefing tagged ‘Perpetration of violence under the guise of #EndSARS: Never again – FG,” he said the chances that any peaceful protest would be hijacked at this time were very high.

The minister claimed that based on the intelligence at the disposal of the Federal Government, some Nigerian activists had linked up with others outside Nigeria, “including subversive elements”, with a view to destabilising the country.

He stated, “We cannot and must not allow this to happen.”

Mohammed said, “Any further resort to violence in the name of EndSARS will not be tolerated this time.

“The security agents are ready for any eventuality. A situation in which six soldiers and 37 policemen were murdered in cold blood by hoodlums will not repeat itself. The attack, looting and razing of 269 private and public properties will not happen again. The killing of 57 civilians will not be re-enacted.

“We therefore strongly warn those who are planning to re-occupy Lekki Toll Gate on Saturday to desist. We know that many of those who have been loudest on social media in advertising the plan to reconvene in Lagos on Saturday are not even in Nigeria.

“They are elsewhere around the world fanning the embers of violence and inciting gullible people back home. No one should fall for their antics. No government anywhere will allow a repeat of the kind of destruction, killing and maiming wrought by the hijackers of EndSARS protests last year.”

Mohammed added that the government was watching the role being played by the various social media platforms in the renewed clamour for violence in the country.

He recalled that the social media platforms were the ones nudging the #EndSARS protesters on, until the situation got out of hand.

Responding to a question, Mohammed said there was no way the toll gate could be left closed till when the panel would conclude its sitting and added that it would be wrong to expect such.

Asked what the government would do if the youth went ahead with the protest, the minister simply said, “Security agents will do their work.”

We’ll not allow Lagos to be pushed to carnage edge again, says Lagos

Meanwhile, the Lagos State Government on Thursday warned that it would not allow the state to be pushed to the edge of carnage again and advised persons organising ‘Occupy Lekki Toll Gate’ and ‘Defend Lagos’ to desist from the planned action.

The state government specifically cautioned opposing groups planning protest and counter-protest at the Lekki Toll Plaza to perish such arrangement, saying, “It is not an auspicious moment for such action.”

It pointed out that government’s respect for the citizens’ rights to protest should not be seen as a licence to break the laws, warning that any individual or corporate organisation that incites an action leading to the destruction of public and private properties would be prosecuted and made to pay damages.

A statement by the Chief Press Secretary to the Governor, Mr Gboyega Akosile, indicated that the position of the state government was made known at a joint press conference at Ikeja Thursday by the Attorney General of Lagos, Mr. Moyosore Onigbanjo, SAN, Commissioner for Information and Strategy, Gbenga Omotoso, and Commissioner of Police, Mr. Hakeem Odumosu.

Onigbanjo stated that though government acknowledged the rights of the citizens to a lawful assembly and freedom to express their feelings as guaranteed by Sections 39 and 40 of the Constitution, such rights did not give any citizen the freedom to block highways and prevent other citizens from moving freely within the state.

He said, “Attention of the state government has been drawn to the planned protest scheduled for Saturday, February 13, 2021 at the Lekki Toll Gate for and against the opening of the Admiralty Toll Gate.

“The state is aware of Sections 39 and 40 of the 1999 Constitution (as amended), which guarantees the rights to freedom of expression and peaceful assembly. However, such right does not permit the violation of the rights of other citizens in the state.

“Any individual or corporate body that incites or condones any act leading to the destruction of public and private properties shall be prosecuted under the extant laws and in addition to any penalty the court might pronounce.”

Onigbanjo, therefore, directed the State’s Police Command to stop opposing groups from holding rallies in Lekki and any other parts of Lagos.

No protest will be allowed in Lagos – CP

In his remarks, Odumosu said no protest would be allowed in Lagos.

He stated that security intelligence gathered by the Police Command indicated the “Occupy Lekki Toll Gate” protest and planned counter-rallies would degenerate into a breakdown of law and order, and stressed that the police would not allow any group to carry out the action.

Also, the state Commissioner for Information and Strategy, Gbenga Omotoso, said the steps taken by the state government on the planned protest was not to take away the fundamental rights of the citizens, but to prevent re-enactment of the event that led to the destruction of public and private assets last October.

Also, the Managing Director, Lekki Concession Company, Yomi Omomuwasan, appealed to leaders of movements planning the protest to give peace a chance.

Omomuwasan who disclosed this during a press conference on Thursday said the decision by the Lagos Judicial Panel of Inquiry to return the Tollgate to the LCC had generated strong reactions from youth movements with a group threatening to occupy it and another pledging to defend it.

The MD, however, explained that the company had refrained from commenting since the unfortunate event of October 20, 2020, because it realised that tempers were high, and truth had become a major casualty.

While empathising with individuals and businesses that suffered losses during the unrest occasioned by the demonstrations in the state, Omomuwasan said the LCC approached the Judicial Panel of Inquiry to return the Tollgate to it in good faith and stem its losses.