What Nnamdi Kanu Means For Judaism In Nigeria – Judaism Fellowship 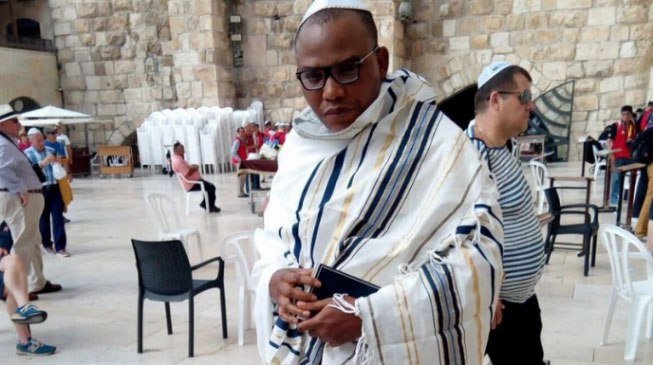 The Judaism Fellowship Initiative (JFI), an umbrella organisation of all the Jewish synagogues in Nigeria, has accused Mazi Nnamdi Kanu, leader of the proscribed Indigenous People of Biafra (IPOB), of feeding gullible minds with wrong doctrines of Judaism.

Chief Arthur-Regis Odidika, president of the Nigerian Judaism Community, said this yesterday at the 10th anniversary of JFI at Ihiala in Ihiala Local Government of Anambra State.

He said Nnamdi Kanu had become a threa the true Judaism religion because he had embarked on mass evangelisation and conversion which was not part of the Jewish movement more so with erroneous teachings.

He said Judaism in Nigeria, which was growing organically, had experienced the influx of a large number of followers of Mazi Kanu who knew little or nothing about the religion.

He regretted that the IPOB leader, Nnamdi Kanu had decided to adopt Judaism, a religion of peace for his separatist agenda and called on the Federal Government to save the movement by supporting whatever measures to purge it of aliens.

“One of the things that is bothering Judaism in Nigeria, especially JFI, the umbrella organisation of Jewish community in Nigeria, is Nnamdi Kanu declaring Judaism as his religion, using IPOB radio to preach and evangelise.”