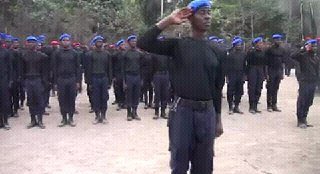 The well-known IPOB – Indigenous People of Biafra has warned individuals calling for members of its security outfit, the Eastern Security Network to work with the newly formed security outfit in the South-East, Ebubeagu to desist from such calls.

LATEST: Buhari Welcomes New Niger President In State House Abuja
IPOB in a statement on Monday warned that the light and darkness cannot work together. The spokesman of the group, Emma Powerful, described Ebubeagu as a ghost group monitored by the Nigerian security agents, who are enemies of the ESN and its leader, Nnamdi Kanu.

He wrote, “We the Indigenous People of Biafra (IPOB) under the command and leadership of our great and indomitable leader, Mazi Nnamdi Kanu, have noted with keen interest, the genuine calls by some eminent Igbo for collaboration between our gallant Eastern Security Network, ESN; and the ghost Ebubeagu security network recently floated by the treacherous South-East governors. We have equally noted similar calls by some self-acclaimed but unreliable Igbo elders and Ohanaeze chieftains.”

“But we have a simple question for them all: can light and darkness work together? We all knew the circumstances that gave birth to ESN. It was when the cowardly governors woefully failed to stand with the people who were being raped and slaughtered daily by Fulani herdsmen and jihadists that our leader, based on the yearnings by the people had to establish ESN to save the situation. And ever since then, the narrative has changed.”

“Out of envy and jealousy as those being remote-controlled by the Caliphate, the South-East governors belatedly, and without coordination announced a ghost security outfit – Ebubeagu. For the discerning minds, the action of the governors and their slavemasters is a suspect. They are out for something sinister but we are too smart to fall for it.”

The group further stated that the South-East governors should have supported the ESN rather than create a ghost security apparatus without personnel.

“Where are the personnel of the so-called ‘Ebubeoke na Ngwere? When Amotekun was formed by South-West Governors, did you not see their personnel and equipment? When our leader established ESN, did you not see our gallant men? How then are you asking ESN to collaborate with ghost Ebubeagu that has no identifiable personnel?”

“How can ESN collaborate with Ebubeagu that is being supervised by the compromised Fulani-controlled Nigeria security agencies? Heads of all security agencies in the South-East are all Fulani who has failed to protect our people against their kinsmen and foot soldiers of the Fulanisation agenda. These are those behind the formation of Ebubeagu, and you want us to work together with them?”

“Asking ESN to collaborate with Ebubeagu is like asking Lucifer to midwife the birth of Jesus Christ. But for the gullible, Ebubeagu was simply floated to spy on ESN and IPOB. The aim of the Caliphate in forcing their puppets called South-East governors to float the imaginary outfit is to scuttle the bonding unity among Ndigbo and set our youths against themselves but we are ahead of them in this game,” the statement disclosed further.

IPOB added that the people of the region have lost faith in their governors, asking that an opinion poll should be conducted to show if they would go with ESN or Ebubeagu.

“If the South-East governors were sincere, they would have rather supported ESN which has been doing a pretty job since inception instead of floating this joke and mockery. They should hide their faces in shame for working against the desire of their people. Go and conduct an opinion poll among Ndigbo and know what they want: whether ESN or Ebubeagu is their choice, then the result will determine the next line of action.”

“The security of our land is sacrosanct and too sensitive to be left in the hands of these political desperados without conscience. They can easily compromise it for a pot of porridge and selfish political interest. We will never take such a stupid risk!

“The people have lost confidence in the governors who abandoned them when it counted most. ESN came to their rescue and will defend them until Biafra is fully restored where their security can be guaranteed,” the statement added.