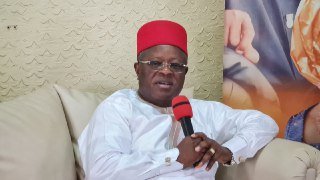 Governor of Ebonyi State, David Umahi, has said that hoodlums, bandits and kidnappers are behind the violence and killings in the South East region.

The Chairman of the South-East Governors Forum disclosed this on Wednesday in an interview on Channels TV’s breakfast show Sunrise Daily.

The governor also accused some politicians in the region of importing criminals from outside the South East to advance their political interests.

He, however, stressed that the support for Indigenous People of Biafra (IPOB) is declining due to the actions of the group and the level of violence in the region.

Umahi said that the agitation in the South-East was a result of marginalisation and it has now snowballed into violence in the region.

He said: “At the initial time, it was an issue of ‘look, we are being marginalised. A lot of people keyed into that.

“Then, along the line, it developed into violence. And then later, the same agitation has been hijacked by criminals, bandits and kidnappers.”

“Those in the diaspora that went for greener pastures and they failed to get such become very bitter with the Nigerian society. And so, followers kept growing.”

Speaking further, Umahi said the violence in the region worsened when the farmers-herdsmen came up, and the people felt the governors were not protecting them.

He added that the governors did a lot to ensure that there was peace between the herders and farmers, but the residents were not satisfied.

“They were a couple of killings in the South-East and the people were a bit helpless and felt the governors were not protecting them,” he said, adding that though the governors did a lot to ensure that there was peace between the herders and people, residents were not satisfied.

“You see, some uninformed elements felt that the only way to solve the problem between us and herdsmen was to ask them to leave the South-East.

“Then came the IPOB with ESN (Eastern Security Network), which is the militant aspect of IPOB, and they started to issue orders of threats.

“So, along the line, the whole exercise has been hijacked. In the South-East, we no longer have kidnappers; everyone that commits one criminal act or the other claims to be IPOB,” he added.