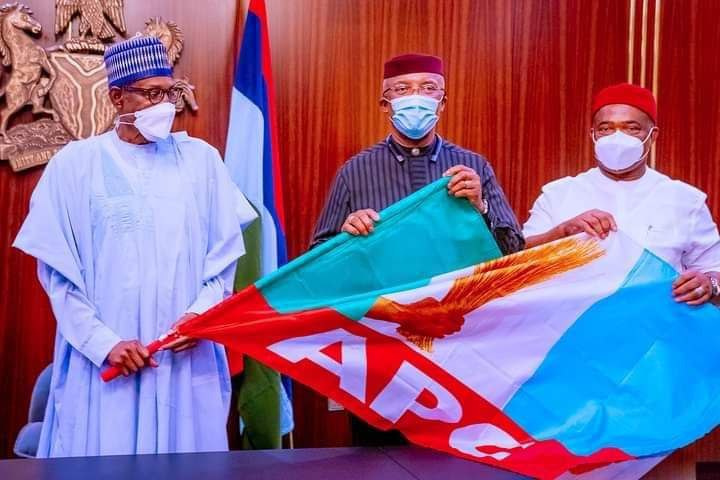 The APGA National Publicity Secretary, Barrister Tex Okechukwu said in a statement on Wednesday evening that Okeke dumped the party because he didn’t get the governorship ticket for the 2021 election in the state.

Okeke also met with President Muhammadu Buhari at the Presidential Villa on Wednesday.

Briefing State House correspondents at the end of the meeting, Uzodinma said there will be more defections to the ruling party before the upcoming governorship election in the state.

Reacting to the development, Okechukwu said Okeke started misbehaving since he didn’t get APGA’s governorship ticket for Anambra which he thought would be handed to him on a platter of gold.

According to him, “The deputy governor had thought that the governor and the party were going to hand over the governorship ticket of the party in the last primary to him on a platter.

“When that didn’t happen he started behaving abnormally, even to the point of insubordination and dereliction of duties.”

He added that APC just received a political deadwood into their midst as Okeke has nothing significant to contribute in the forthcoming Anambra governorship polls.

APGA also claimed the Deputy Governor didn’t formally notify his boss, Governor Willie Obiano or the party of his intention to switch allegiance to another party.

It added that despite all these happenings, APGA will emerge victorious as the November 6 governorship polls.

“Let nobody be deceived: APC has no root anywhere in Anambra State and that is why all that they do is going about luring political deadwood with money and other lucres.

“No matter the designs of the opposition and other subterranean forces, APGA Is poised to win the forthcoming election and continue with the massive infrastructural development going on in the state,” he said.