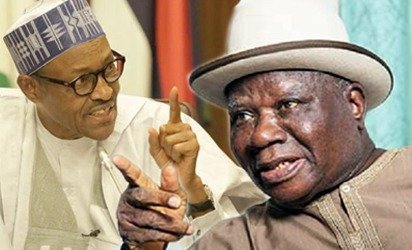 Former Federal Commissioner for Information and South-South leader, Chief Edwin Clark has warned that the struggle by the Indigenous People of Biafra, IPOB and Yoruba nation agitators will be child’s play in Nigeria if the country fails to restructure, just as he warned that there will be chaos in this country.

According to Clark, the agitation for self-determination and secessions will definitely increase and the security situation of the country will be worsened and the conduct of 2023 general and Presidential elections will be threatened.

The Ijaw leader who noted that the South, the North and the entire country are calling for restructuring, urged President Muhammadu Buhari to as matter of urgency convoke a Representative Assembly or Town Hall meeting to consider Governor Nasir El- Rufai of Kaduna state’s All Progressives Congress, APC Committee Report on restructuring or that of 2014 National Conference report.

Addressing Journalists yesterday at his Asokoro residence, Abuja, the leader of Southern and Middle Belt Leaders Forum, SMBLF warned that President Buhari must not allow Nigeria to break due to what he described as the authoritarian attitude of one individual, just as he stressed that restructuring has become very imperative because it was one of the key priority issues in the APC’s Manifesto when it was formed and during the 2015 Presidential campaigns which have now been abandoned on the assumption of office by the President.

He said that if the APC cannot implement its own committee’s recommendations, it means that it lacks the necessary capacity under President Buhari.

The Elder statesman who noted that he is close to 95 years and speaking on behalf of fellow elders and Nigerians, said that he will not stop talking and writing to President Buhari about Nigeria and its challenges, adding that nobody will be a slave to another in the country and that the President is not an Emperor or a king, but elected by the people to serve Nigeria and Nigerians irrespective of race, religion or ethnic group.

According to him, Nigeria must be ready to fight for liberation as the prison is not only for thieves but for those who are fighting for the interest of their country, adding that some of them are ready to go for treasonable trial against the backdrop that nobody loves this country more than himself and that Enough is enough.

Clark said,” Mr President, I beg of you, in the name of Almighty God, I am now very close to 95 years, and on behalf of my fellow elders and our children, act NOW. We have no other country to call our own, no other country to go to if Nigeria breaks due to the authoritarian attitude of one individual. Please retrace your steps and embrace and implement your party’s report, the El-Rufai APC Committee Report. Nigerians will accept it.

“I challenge Mr President, Muhammadu Buhari as the de facto controller of the APC, to convoke a representative assembly or town hall meeting, to consider only the APC Report on restructuring if he sincerely believes in the unity of Nigeria, where everyone is a stakeholder, not a Nigeria where only a few or one ethnic group who are in minority, keep displaying autocratic and emperoic stance, reminding us of what their forefathers did over 100 years ago, wanting to do same today. Of course, it is a big NO!

We cannot be slaves in our own country.

“The National Executive of the APC, in a meeting which was also attended by Mr President, Muhammadu Buhari, himself as a party member, accepted the Report of the El-Rufai Committee and stated that it will be sent to the National Assembly (NASS).

“However, same Mr President has refused to take any definite action for the Report to be sent to the NASS. What several Nigerians want is actually the restructuring of the country in order to douse the tensions and agitations which is almost tearing the country apart today, and is the main cause of the high insecurity being experienced.

“Nigerians are ready to accept the implementation of the 2014 National Conference, or the APC’s El-Rufai Committee Report, any of which will no doubt satisfy the generality of the Nigerian people.

“It is indeed shameful and unpatriotic for the Leaders of APC to pretend that they have not seen the El-Rufai Committee Report or even the 2014 National Conference Report. Some are even shamelessly stating that they do not know what restructuring means, and allow President Muhammadu Buhari to take over total control and direction of the party’s government; instead, they are more interested in whom is to take over from him in 2023, for which they pretentiously worship him like god just to gain favour.

The Tinubus who brought restructuring to the Manifesto of APC has not spoken because they fear that if they do, they will not be allowed to contest for the Presidency of the country, come 2023.

“For which his party, the APC, faced with stiff opposition for not implementing their promised restructuring programme. So, the party’s national executive including President Buhari decided to set up a committee under the chairmanship of Nasir El-Rufai, the Governor of Kaduna State, with other prominent party members as members of the Committee. The Committee called for memoranda from Nigerians, went around the country and came out with a Report that buttressed restructuring.”

“Nigeria must be ready. The prison is not only for thieves, it is s meant for those who are fighting for the interest of their country. Some of us are ready for treasonable trials. We’re ready to go. Nobody loves this country more than myself. Enough is enough

“As I said, I am speaking on behalf of the majority of Nigerians who are aggrieved. A meeting called by Mr. president to Aso Rock of representative of Nigeria will not last more than one day. The executive will then prepare a memorandum to the National Assembly and within three or four months they will be completed. The National Assembly has been spending N1 billion every year on amending the constitution of Nigeria for years now they have not been able to do so.

“So if the APC is the party ruling Nigeria today, it means it lacks power under President Buhari to implement whatever they want to implement in the interest of Nigeria. So the issue of time does not arise. If they want to do it within six months, it will be carried out. otherwise, the problem of IPOB and others will join.

“Let me warn you that this country does not belong to a few individuals. What IPOB is doing, what the Yorubas are doing is still child’s play. No other Nigerian is prepared to subjugate himself.

“We may all join and there will be chaos in this country. Some of us are already on our way out. But why should we live in Nigeria that God has given to us, the biggest country in Africa with resources, human resources after the United States of America, I don’t think there’s anyone that can treat us like second-hand citizens. But what are we doing with our resources?”

Whitemoney Goes Down On His Knees In Dubai Airport After First Trip Abroad, Nigerians React