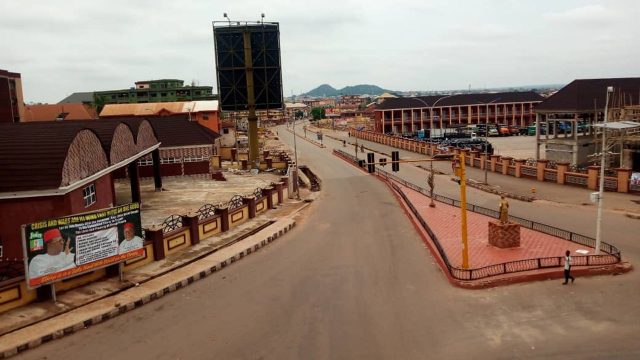 The capital city of Abia State, Umuahia was a ghost town Tuesday , as residents remained indoors in total compliance with the sit-at-home order issued by the Indigenous People of Biafra in solidarity with its Leader who was to appear in Abuja court.

From the morning hours till the time of filing this report, economic and commercial activities were paralised as markets are street shops in the capital city remained shut down.

The roads were also dry except for occasional vehicular and human movements.

Some tricycles were sighted conveying passengers occasionally as the road witnessed few traffic compared to what obtains on a normal day.

Schools did not open as teachers and parents stayed back home with their children while banks also remained shut down.

Aba was also reported to be on total lockdown as residents deserted the streets.

The exercise was however, generally peaceful as there were no incidence of security breach in any part of the state.