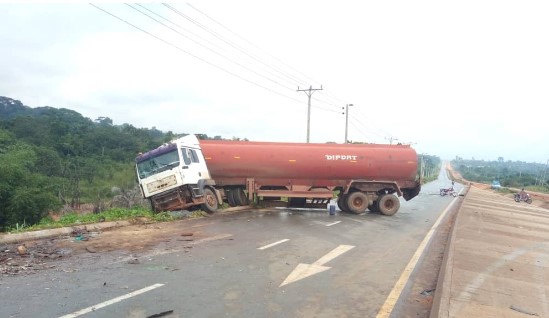 At the Abba-Ukpo intersection on the Onitsha-Enugu Expressway, which is close to the Dunukofia Local Government Secretariat in Anambra State, there were numerous accidents.

One of the cars involved in the collision, a tanker carrying Premium Motor Spirit, fell and completely blocked the area of the road.

It was learned that a Peace Mass Transit bus, a Hyundai SUV, and a fully laden PMS tanker were all involved in the collision, which happened in the Awka-bound lane of the highway.

The portion was completely cordoned off, while men of the state fire service were on the ground to ensure there was no fire outbreak.

The development forced all motorists to make use of the Onitsha-bound lane, which is in deplorable condition, as an alternative to continue their journey to their various destinations.

Motorists and other road users had a hectic time navigating through the dusty road as personnel of the Federal Road Safety Corps were also on the ground to ensure a hitch-free movement.

Although, as of the time of filing this report, the casualty figure could not be ascertained as the accident was said to occur late Wednesday night.

However, some eyewitnesses said that many were injured, but not sure of the number that lost their lives during the road crash.

The resultant development caused a tortuous moment for travellers as they struggled through the bad portions of the alternative route forced on them.

Reacting, the State Fire Chief, Mr Martin Agbili, said fire truck and firefighters were immediately drafted to the scene of the incident, to salvage the situation.

Agbili said the cause of the accident is yet to be determined as the incident took place in the night.

In a statement, he said, “At about 0800hrs of today (Thursday), Anambra State Fire Service, received a distress call of road crash consisting of peace mass transit, Hyundia SUV and a fully loaded PMS tanker at Abba-Ukpo Junction Enugu-Onitsha Expressway.

“We deployed immediately, our fire truck and firefighters to the incident scene to salvage the situation. Our agile and diligent Firefighters are doing the needful now.

“The road is temporarily blocked to avoid further incident or fire outbreak and to allow us do the needful. Please find another route for your journey.

“The cause of the road crash is yet to be determined as the incident took place at night. However, some eyewitnesses informed us that many were injured and were not sure of the number that lost their lives during the road crash.

“I wish to applaud other sister Agencies who were present at the incident scene for traffic and crowd control.”