Atiku Flown To France For Medication After…

Wike Warns Jandor, Rhodes-Vivour, Others On Contesting Against Sanwo-Olu 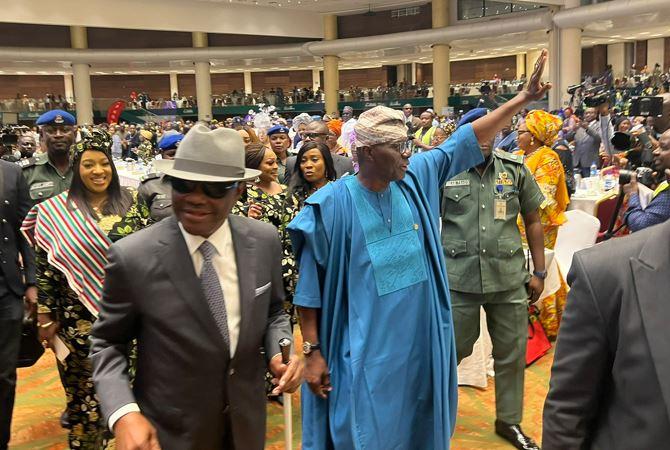 According to Anaedoonline.ng, Wike supported Sanwo-Olu even though his political party, the Peoples Democratic Party (PDP), nominated Olajide Adeniran, commonly known as jandor, for governor.

The 22nd National Women’s Conference was held by the Committee of Wives of Lagos State Officials, and the Rivers Governor erected his tent beside his counterpart from Lagos during that time (COWLSO).

The event took place at the Eko Hotels & Suites in Victoria Island, Lagos, with the slogan “Spring Forth, Stand Out.”

Ayo Fayose, a different PDP official and former governor of Ekiti State, went to the ceremony with Wike.

Wike gave Sanwo-Olu excellent marks for performance while observing that the Lagos Governor had improved governance through the caliber of the projects completed around Lagos.

He claimed that any political party running against the All Progressives Congress (APC) in Lagos would be wasting their time because Sanwo-Olu will outperform them.

He insisted that his open support of his Lagos colleague Sanwo-Olu was motivated by his belief in good governance and that he had no remorse about doing so.

“Look at the kind of project coming from this women’s group. Why would any reasonable person not support the Government that is encouraging this? Let’s also look at the kind of physical infrastructure being delivered in Lagos. This confirms Lagos as a State of excellence. There are some people who will come here; instead of them to continue to make Lagos improve, they will bring Lagos down. For me, I’m satisfied with what Sanwo-Olu has done, and it doesn’t matter the party he belongs to.”

Sanwo-Olu responded to Wike’s backing by stating that it was just another illustration of “politics without bitterness.”

He claimed that Lagos and Rivers states had shared lessons in projects and development and that they will continue to work together on common goals.

He said: “There is no better person that is fit as a guest speaker at the conference other than the hardworking Governor Wike of Rivers State. We brought him here to share in his experience and also for him to see what we are doing in Lagos.

“We are encouraging collaboration without bitterness and without talking about our parties or political differences. If you are doing well, it doesn’t matter where you belong. We should encourage peer review across parties.

“Gov. Wike had invited me to Rivers for projects commissioning in the past. We have challenged ourselves in a positive way; this is good for the growth of our politics and the nation.”

According to Anaedoonline.ng, Gbadebo Rhodes-Vivour is also running for governor of Lagos State on the Labor Party’s platform.

If Ngige Openly Picks Tinubu, His Life Might Be Threatened – Chukwemeka