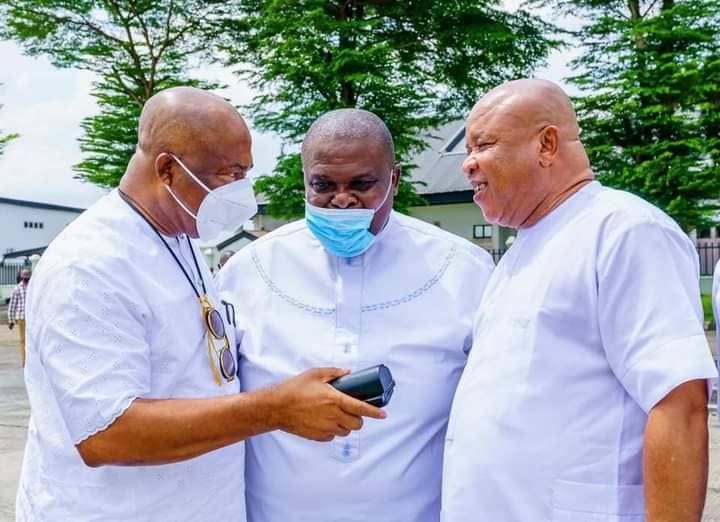 Senator Ifeanyi Godwin Araraume, the candidate of the All Progressives Congress (APC) has disassociated himself from the news circulating through the social media that he had secret meetings with the former Speaker Rt. Hon. Chiji Collins which culminated into removing him from the office.

This was contained in a release by the Media team of the former Senator of the Federal Republic of Nigeria who represented Imo North Senatorial district between 1999 and 2007 and made available to the media.

Senator Araraume through the release stated that he had no business with the former speaker Chiji Collins even the new Speaker, Rt. Hon. Paul Emeziem.
The statement as it reads in parts:
“Our attention has been drawn to a reckless and crass claim that the impeachment of the former speaker of Imo House of Assembly (IMHA), Rt. Hon Chiji Collins was a consequence of a meeting between him and Distinguished Senator Ifeanyi Araraume”.

“We considered it worthwhile to give attention to this for record purposes which must be put straight so the public won’t run with falsehood. To that effect we wish to state categorically that there was no such meeting anywhere between Rt. Hon Chiji Collins and Distinguished Senator Ifeanyi Araraume”.

“Ever since the lockdown came into effect as a measure to curb the spread of COVID19, Senator Ifeanyi Araraume never stepped out of Abuja for the East except on the 2nd of September 2020 when he came into the state for the APC Imo North Senatorial bye-election primary which took place the following day, 3rd September. He left back for Abuja early morning on the 4th being the day after the primary without seeing any visitor in his house”.

“It could be recalled that on his arrival from Abuja for the said primary, he immediately joined the meeting of the aspirants with the governor which lasted till about 3am the following day. Hence, there was no time for any meeting with any other personality”.

Read Also: Okorocha, Araraume In Fresh Romance To Unseat Ihedioha.
He admonished the public to disregard this rumour, that it is baseless and unfounded. According to him, “It is the handiwork of mischief makers who think that the best way to ascend to power is by sparking off rumours and to create disaffections against personalities like Araraume”.