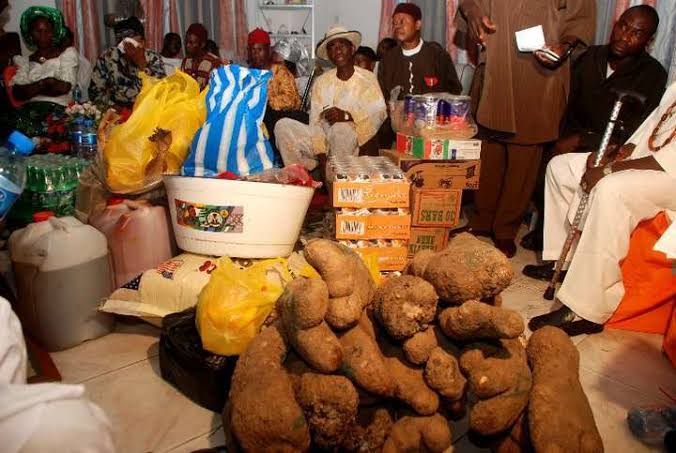 Bride price is one of the most controversial Igbo marriage rites, it has been an object of fierce social debate especially the (in)famous Mbaise outrageous bride price list. Brideprice across Igboland varies in details and requirement but one thing is sure “Bride price is the only thing that validates every Igbo marriage agreement”.

In the wake of continuous conversations concerning Bride price in Igboland, Anaedoonline decided to do some findings of our own which are presented below.

We must, however, point out that states are a creation of non-Igbo military men and a state does not necessarily represent one sub-group. States in Ala-Igbo house dozens of distinct cultures.

Again, marriage rites are not entirely a village- or township-wide affair. Most of the time, each Kindred or Umunna sets the tone as to how their daughters would be married out.

Anambra State might not be on the radar of the states being dragged for exorbitant bride price but an inside interview with indigenes and visitors alike says otherwise, little wonder, the Anambra State House Of Assembly passed a bill a few years ago regulating the cost of traditional marriage rites in the state. The law did not just come but it was based on the complaints of the people.

Some time ago, a young man took to social media to share a rather bizarre piece of information from his fiancee who told him that before he gets the main bride price list, he will be required by her people of Idemili to deposit a cash equivalent of a two-story building. The young man was as expected shocked and took to the social to confirm this or if it was just a prank, surprisingly someone on the thread confirmed it whilst the majority disputed it.

Going by the rule of the danger of a single story, we dug further and asked questions around.

In our quest, we found out that these lists vary from community to community and are not consistent, it is usually as listed by the bride’s family. In an interview with some people who married from the state, they said that they did not spend more than a hundred thousand for their marriage rites, while some lamented on the expensive bride price list that deterred them from getting married on time.

In Onitsha, there is a customary law enforced by the Obi-in-council regulating the amount of money to be spent during marriage rite, if the limit is exceeded there is a penalty to be paid to the Imeobi purse of the council.

However, we noticed that if you are not from the state, that the bride price list doubles or sometimes skyrockets as it pleases them.

The first place that comes to mind when the hot debate of bride price pops up, is Imo State, in particular, Mbaise LGA.

Imo State has always been on the news for their supposed outrageous bride price list and demands. In some of the purported lists, a motorcycle was demanded by the potential mother-in-law, a trailer of large tubers of yam, and other unbelievable demands.

Contrary to the general assumptions out there, the Imo State bride price list is not the most dramatic you will find across Igboland. Interaction with the locals has revealed otherwise; according to some of them, they’ve never seen anyone who turned back from marrying an Imo State lady because of the alleged expensive bride price rather it is stories told by someone that knows someone.

Read this – Marrying An Mbaise Girl – Separating Myth From Reality

But what does it really take to marry an Imo State lady? The information we got was not exactly the same but one thing was consistent. The bride price list is largely dependent on the lady’s family/kindred; it is true that some items are customarily demanded by the community but it is up to the family to adjust it accordingly.

An undisclosed older citizen of Mbaise community told us that he never took a kobo for the bride price of his daughters.

In some communities, the bride price list presented to the indigenes is also the same with visitors.

It is no surprise that Abia State shares almost the same reputation as Imo State when it comes to bride price seeing that they used to be the same State, with related dialect so there is always bound to be a cultural mix.

As seen in other southeastern states, the bride price in Abia differs from community to community. Around the Umuahia LGA, bride price seems to be on the high side with demands like cows and motorcycles, especially if you are not from the state.

The Ohafia axis was a huge contrast to the southern part of the state, in the community you can marry your wife for next to nothing. The bride price is largely dependant on the financial capability of the guy. The same courtesy is extended to visitors too.

In Ebonyi State, they have a philosophy that marriage is not a money-making business so they give out their daughters to the ones who are capable of taking care of them, not to the highest bidder.

In Edda, a suitor is expected to go on a day’s farm work with 20 friends on the farm of the prospective in-laws. This is to prove to the in-laws that he is hardworking and their daughter will never lack food. In Ohaozara LGA, for instance, it is a bit more in material terms, the suitor is expected to buy a box of clothes for the bride to prove he can take care of her.

The bride price usually does not exceed 100 naira in actual monetary exchange.

Enugu is probably the cheapest Igbo State to marry from. In several parts of Enugu, apart from the traditional presentation of kolanut, palm wine, and meeting the bride’s family, nothing is demanded as bride price.

According to a traditional ruler in an Nsukka community of Enugu State, bride price is a borrowed culture in Igboland that is why there is no bride price list in his community.

Whilst some parts of the state do not demand more than the traditional requirement, the other part has strict regulation on the bride price list.

Despite the slight variation from community to community in Igboland, the marriage rite of bride price seems to be the same except for where customs and traditions differ.