2023: The Differences With Saraki, Tambuwal, Other Northern Aspirants – Wike 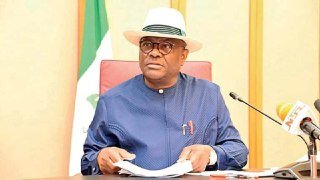 Nyesom Wike, the Governor of Rivers State and a presidential hopeful, voiced his disagreement with presidential aspirants from the north over the zoning of the presidency to the south on Monday.

According to Wike, he has always backed presidential candidates from the north, and he wonders why Northerners won’t back a candidate from the south in the general election in 2023.

Wike noted that despite the odds against him at the time, he backed Tambuwal for Speaker of the House of Representatives and Saraki for Senate President.

He went on to say that only Samuel Ortom, the Governor of Benue State, has showed interest in supporting his presidential bid.

When questioned about his relationship with Saraki, Tambuwal, and other PDP governors, Wike stated his issue with Nigerians is that “people don’t want to speak the truth, and I feel so horrible.”

He stated, “There is nobody today contesting for president of this country from the North that I did not have a relationship with or that I did not support. There are nine of them who have not come to me to say, ‘Wike, with you, I think I will have my way.’ And I always told them, ‘I agree, but what is on the ground; what is on the table?’

“If you ask most of my friends, the problem I have with friends is that if we agree on something, let’s keep to it. If there is any reason why that shouldn’t be done, I should be notified.”

Secondus: Tambuwal Backs PDP In The Quest For Unity

He added, “I will tell you one. Sadly, it is with one very intelligent young man Nigerians listen to – Bukola Saraki with all due respect. I was one of those who made sure he became a Senate President. He was in APC. I tweeted and spoke about his intelligence. Whether you hate him or you don’t like him, this young man is intelligent. Why would you not allow such a person to be at the helms of affairs? I never hid my feelings.

“My brother and friend, Tambuwal, when he wanted to be Speaker, the government and the PDP didn’t want him to be the Speaker. I was one of those who said no, we shouldn’t do that. I came out and said he should be Speaker. Even when he wanted to be president, I was one of those who said he was a vibrant young man and it didn’t matter; that we should not do it by age. People were fighting me all over…in the South, in the West, in the North, in the East. They all fought me. ‘Why are you bringing Tambuwal?” I said it was not about me bringing Tambuwal. I said I had found somebody that I thought had all it takes to lead.”

Wike noted that he did not support the presidential bid of former Vice President, Atiku Abubakar, but when Tambuwal lost to Abubakar at the primary, he gave all his support to Abubakar.

Wike confirmed on the national TV programme, “I want to challenge anybody, any governor, any person in this party who would say they gave Atiku the support I gave. In fact, I can tell you that in the South-South, it was only in my state that APC never got 25 per cent (votes). Atiku knows that I came all out and supported him.”

He noted that stakeholders in the main opposition party had a gentleman’s agreement that power should be shifted to the South in 2023.

Wike said, “If there are factors that have come up, you can say, ‘look, gentleman, my brother, I think what is now is not what was available then.’ And then, we can sit down and talk about it. So, what I do not like…I feel bad when people say, ‘oh, it is not right for a Wike.’ No group can win an election without the other group. No northerner can win without the southerners.”