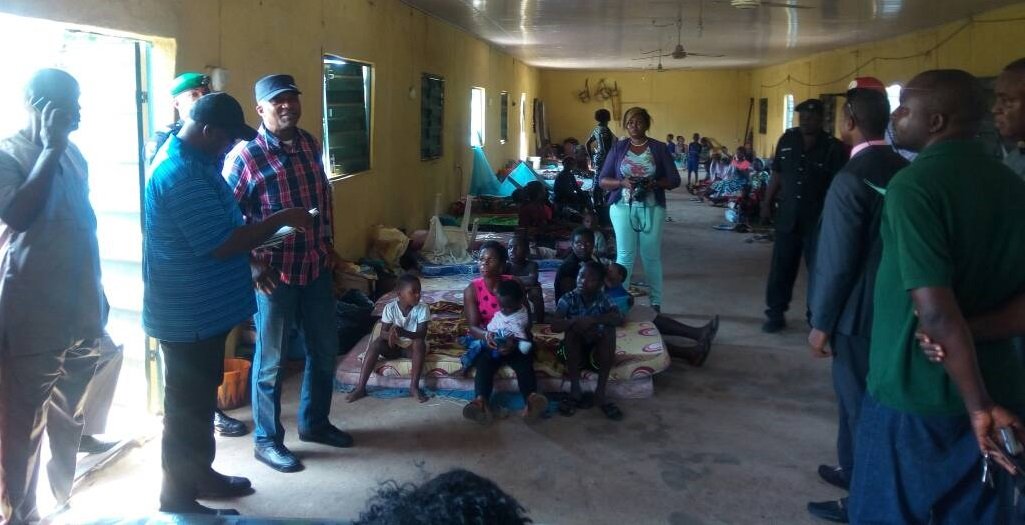 Share0
Join AnaedoOnline Telegram
The Transition Committee Chairman of the Council, Mr Arinzechukwu Awogu was said to have gone with a team to provide necessary assistance.
A flood-affected woman has delivered a boy and a girl in one of the Holding Centers provided by the Anambra State Government for those affected by flood in Ogbaru Local Government Area of the State .

Meanwhile, the State Government has also continued to keep tabs on the flood situation in the State, making more interventions.

Deputy Governor, Dr Nkem Okeke who is the Chairman of the State Emergency Management Agency Committee went round some affected areas and Holding Centers to conduct further assessment with the aim of addressing noticeable shortcomings.

The team, led by the Deputy Governor Dr Okeke commenced inspection with helicopter to Enugwu-Otu and Agulueri-Otu, where ABS observed that the areas have been completely submerged by flood.

The team later flew to Aguleri, Otuocha and Central School Atani. At Ogbaru, the Deputy Governor went to Holding Centers set up by the State government and it was discovered that mattresses and food supplies, among other items were in place.

He equally inspected the kitchen to see how things are working and the store which had stocks of detergent, gallons of ground nut oil, bags of rice, beans, cartons of noodles, beverages, bags of garri, cartons of tomatoes, and treated mosquito nets.

The Deputy Governor urged persons at the Holding Centers to exercise patience, assuring that State government is dedicated to their welfare.

While expressing optimism that the flood will recede in no distant time, he said that the National Emergency Agency, NEMA has been in the State making further assessments and giving more interventions, urging more well meaning individuals and organizations to assist.

Some persons affected by the flood who spoke to the ABS off Camera, lamented lack of portable water, electricity, means of livelihood, among others.