Vladimir Putin Wins ‘By Landslide’ To Stay In Power Until 2036 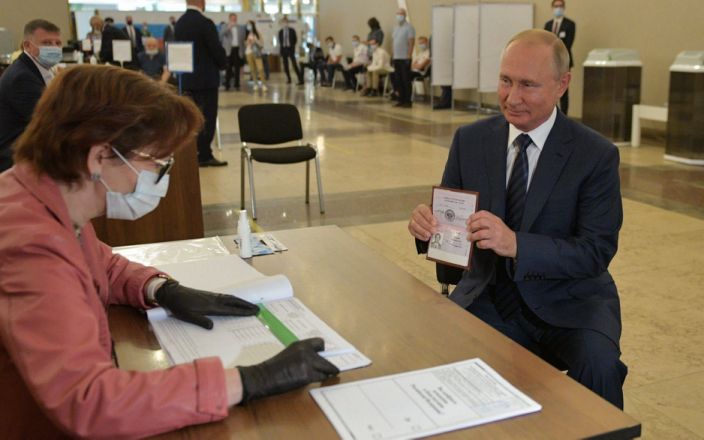 The Kremlin has overwhelmingly won Wednesday’s vote on constitutional changes that would let Vladimir Putin, the Russian president, stay in power for 16 more years.

Russia’s Central Election Commission on Thursday morning unveiled a full preliminary count of the vote, showing a staggering 78 percent backing the constitutional amendments. The turnout was reported at 65 percent.

The overwhelming support for essentially allowing Mr Putin, 67, to rule for life stands in sharp contrast with recent opinion polls.

Putin: As long As I’m President, There’ll Be No Gay Marriage In Russia

Approval ratings for Mr Putin, who has ruled Russia for 20 years, have been declining for years before hitting an all-time low of 59 percent in April, according to the Levada Centre pollster, compared to nearly 80 percent in 2018 when he won re-election.

Polling on constitutional amendments indicated the Russian people would be less enthusiastic about handing him a mandate to rule until he is 83 than the crushing victory suggests.

Mr Putin on Thursday thanked Russians in a televised address for “people’s trust” and spoke about the fall of the Soviet Union in 1991, saying that a new Russia still needs “domestic stability and time to strengthen our country and its institutions.”

The vote, which included over 200 amendments including vague pledges to improve health care, was not bound by Russian election laws.

Independent observers claim the Kremlin has been given a free hand in vote-rigging as a result.

Golos, one of Russia’s most respected election monitors’ groups, in a scathing statement on Thursday condemned the nationwide voting as something that “will go down in history of our country as an example of encroaching on the sovereignty of people.”

“Rules that were deliberately designed by the amendments’ authors and organisers of the vote made it impossible to convey people’s free will,” Golos said.

“The results of the popular vote have been rigged, and they do not match the results announced by the Russian Election Commission.”

Ella Pamfilova, the commission’s chief, said on Thursday that she was not aware of any violations that could have significantly altered the outcome of the vote.

Kremlin watchers expected that coercion to vote and vote-rigging would help authorities to deliver a comfortable win for Mr Putin but the reported 78 percent vote for the amendments still came as a shock for many opposition supporters.

The exact purpose of demonstrating such a staggering approval for President’s Putin’s rule for life was to “intimidate people and to show to those who voted against that they are a miserable minority,” political analyst Ekaterina Schulmann said on the Ekho Moskvy radio station on Thursday morning.