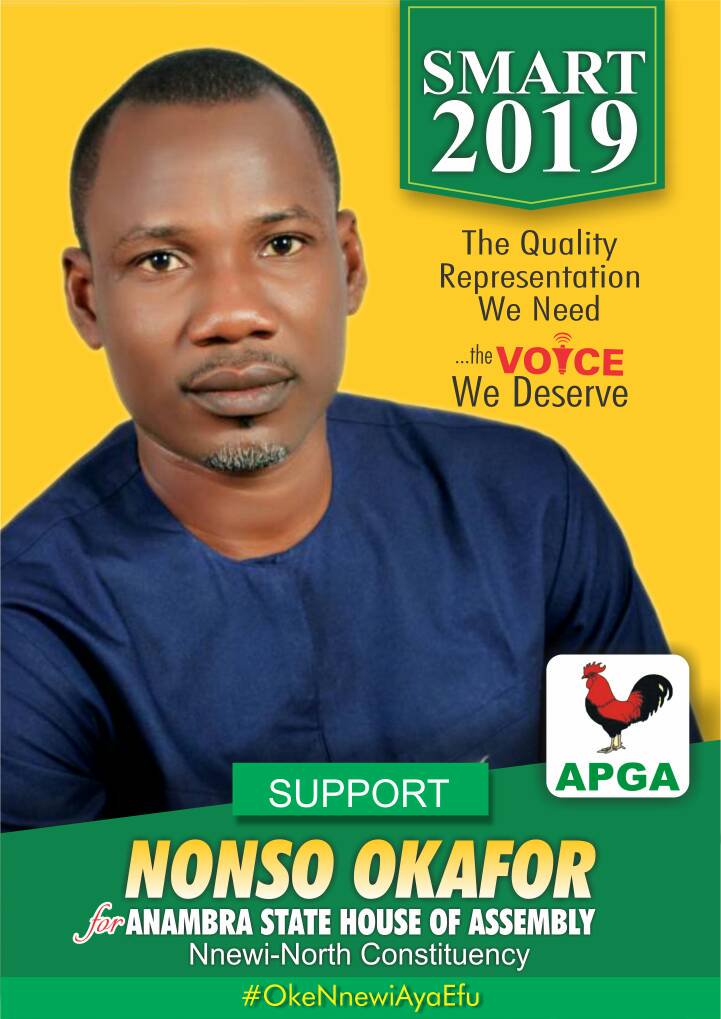 Comrade Nonso Smart Okafor, the candidate of the All Progressive Grand Alliance, APGA, has won the House of Assembly seat for Nnewi North State Constituency.

Comrade Okafor pooled a total of 13,231 votes; leaving his closest rival, Dr. Obinna Ngonadi, of the Young Progressive Party, YPP, trailing behind with 12,383 votes; just as Hon. Benchuks Nwosu of the PDP got 2,452 votes to come distant 3rd.

The Returning Officer for the election, Dr. Alapuchukwumbuikem Eugene, while announcing the result at the Nnewi North Independent National Election Commission (INEC) collation center, said that Nonso Okafor of the All Progressive Grand Alliance (APGA) having satisfied the provisions of the law, and having gotten the highest number of votes cast, has been returned elected.

At the onset of the exercise in the morning hours of Saturday, March 9, there was widespread vote buying allegedly masterminded by the YPP faithful, leaving much apprehension that the APGA candidate, Okafor, who will hopefully offer quality representation to the people of Nnewi North State Constituency, may not emerge at the end of the day.

This is even when there was a widespread campaign of calumny that Nonso Smart Okafor is a son of “Akara woman” from a very poor family, who is “Mr. Nobody” and who has no “surname”.

Meanwhile, in his message to the constituency on Sunday, March 10, Nonso Okafor, member-elect, Anambra State House of Assembly, Nnewi North State Constituency, thanked his constituency for their support, by entrusting him with their mandate. He also extended his hand of fellowship to his co-contestants, charging them to put the contest, which he described as a family one affair behind and join hands with him to attract the needed democracy dividend to the constituency.

Part of the message read: “I wish to thank the Almighty God, who has kept all of us in good health to witness this day. This is historic! A history that only God can make happen. Without Him, this wouldn’t have been possible.

” But for His awesome grace and favor, this victory became a reality. May His name alone be praised, Amen.

“Umunnem, from the depth of my heart, I wish to thank all of us for voting for me to become Member-Elect, Nnewi North Constituency, Anambra State House of Assembly. Without your votes, I would not have gotten here. This means a whole lot to me and I promise you; you will never regret entrusting this position on me.

“To my teeming supporters, may God bless all of you. You defiled every human turbulence and obstacle to stand with me on this journey even when it never looked possible. I will make you proud. This is my promise to you.

“To my brothers and sister who ran this race with me, I urge you to join heads with me to offer our people quality representation they will be very proud of. Like I usually say, this is a contest between brothers; the election will come and go but we remain brothers.
READ ALSO: NONSO OKAFOR (SMART) BAGS AWARD OF EXCELLENCE
“Umunnem, this victory is for you. This victory will open up a new chapter in the history of our land; a positive and prosperous future for all of us.”

APGA LEADS YPP IN NNEWICHI WITH OVER 3000 VOTES.